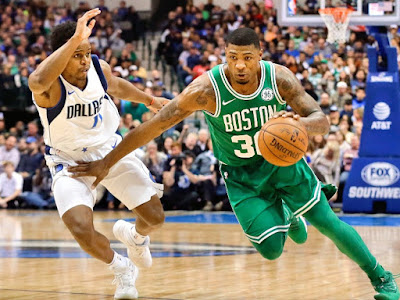 There will be a number of different teams interested in inking Celtics restricted free agent Marcus Smart to a new deal this summer, and according to 24/7 Sports' Mike Fisher, the Mavericks are one of them.

A recent report states Dallas is considering approaching Smart this summer if both sides can come to an agreement on the correct asking price. Boston, the only NBA franchise Smart has played for throughout his four-year career, can of course match any outside offers to keep him with the Celtics.


"An NBA source tells Dallasbasketball.com that depending on Smart's asking price, the Mavs can be expected to explore pursuing the 6-4 guard, a defense-first battler who scores 10 points per game for a Celtics team that made it to the Eastern Conference Finals.

"This news is part of the Mavs juggling balls, too. The coming hours are heavily devoted to Thursday's NBA Draft, when Dallas has the No.5 pick. But who gets drafted (and at what position) is part of the puzzle of who might be pursued on July 1." [24/7 Sports]

Smart, who told reporters shortly after the Eastern Conference Finals that he believes he's worth more than the $12-14 million range, will be hard-pressed to find a team willing to sign him for over $15 million or more. The Texas native certainly has ties to the area, he grew up in Flower Mound, Texas which is a half hour away from Dallas.

Smart's mother, Camellia, who was recently diagnosed with cancer, is currently in Texas. It could be a draw for Smart to come back home

According to Chris Mannix of The Vertical, the Mavericks aren't the only team rumored to be interested in Smart. The Kings and Nuggets are also potential landing spots for Smart if him and the Celtics fail to come to an agreement this summer.