Celtics Options at No. 27: Moritz Wagner 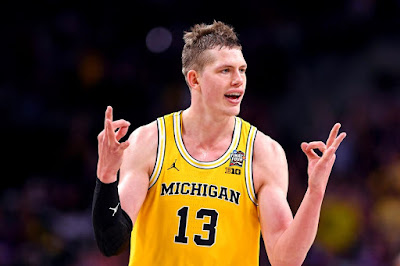 Initially, Mo Wagner planned to declare for the 2017 NBA Draft but a poor showing in the combine convinced him to return to the University of Michigan for his junior season. Developing into a go-to scorer via catch-and-shoot and as a pick-and-roll threat.

Averaging 1.171 points per catch-and-shoot in the half court ranked an impressive 88th percentile. Wagner's high and smoother than silk release is ready for the pros, without a doubt his stroke is his best asset.

The problem with Wagner is he doesn't do anything else besides score, averaging just 1.2 assists per 40 minutes. While his per 40 minutes numbers are impressive -- 21.2 points, 10.3 rebounds -- the rebounding isn't likely to translate into the NBA despite the great fire he plays with.

Born in Berlin, Germany, Wagner grew up idolizing future hall-of-fame forward Dirk Nowitzki, citing him as the reason he wanted to leave his home and become an NBA star. Wagner is not naive to think he can become the next Dirk, rather holding him up as an unattainable goal is fuel for his drive to improve.

His wingspan is his biggest negative aspect and a reason why I'm not confident his rebounding will translate to the pros. The NBA is filled with athletic, long-armed centers that limit players like Wagner to spot-up guys. While Al Horford's wingspan was also 7'0", Wagner is not the passer, defender or anywhere near his level of talent.

He's also no prize defensively. Wagner is too slow to attack close-outs and is limited as a situational five. At the rim, he can attack either face-up or in the post. Even through he averaged a below-average 0.753 points per post-up (38th percentile), Wagner possesses a couple of moves that'll create opportunities for himself and can finish with either hand.

For someone his size to be able to put the ball on the floor and attack is a rarity. Ranking in the 88th percentile while averaging 1.377 points per shot near the rim in the half court is tremendous considering he's not a great athlete but has unique coordination, good timing and great hands.

An irrational belief I have in Wagner is he can grow into a cross between Kelly Olynyk and Clint Capela. Wagner is a mean pick-and-roll threat as the roll-man, ranking 10th in the NCAA roll-man scoring (3.6 points per game).

Against Michigan State's Jaren Jackson, Wagner outplayed the lottery bound center -- he scored 27 points on 8-of-13 shooting, four rebounds and two blocked in 27 minutes. But the large caveat is the two rarely defended each other, which is a good inside look to how Wagner will be used against a team that devotes time to playing mostly small-ball.

In the lone possession, Jackson went up against Wagner on offense and Jackson got the best of him in a face-up isolation opportunity, putting on full display his fluid mobility off the dribble. Wagner specializes in dragging players like Jackson out of the paint on offense while on defense the coaching staff will have to be creative in how they hide him. The Celtics have recently held a workout with him.

If Wagner can guard power forwards, he'll be a tremendous asset off the bench. If the Celtics can utilize Wagner's high Basketball-I.Q. on the defensive end, it'll transform his offensive game into the mold of a better, more aggressive Olynyk or a Carlos Boozer type of player, it'll be a boon for Boston to have someone like that backing up Daniel Theis.

Wagner held his own against some of the NCAA's premier power forwards and centers, he's extremely tough and is a hard worker. His selection would likely be met with gasps and boos but eventually Boston fans will grow to love him.