Celtics Options at No. 27: Grayson Allen 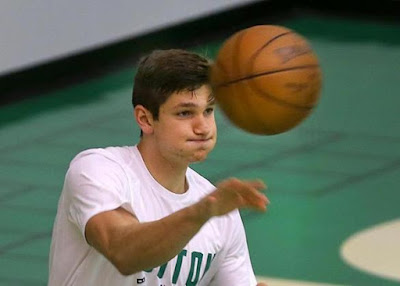 The tough-nosed senior from Duke cost himself millions by staying in college the last two years. Coming off a career year as a sophomore averaging 21.6 points, 4.6 rebounds and 3.5 assists on 41.7 percent shooting from behind the arc, Allen was the focal point of Duke's offense.

It came as a shock to many he decided to return to school in hopes of raising his draft stock. Just like we're used to seeing with stories like these, Allen only succeeded in tanking his stock -- which has now projected him to go anywhere between late first-round and mid second-round -- a far cry from where he was in 2016.

So what happened? Allen returned to a Duke team inheriting Harry Giles, Jayson Tatum and Luke Kennard. Despite the Blue Devil's sexy roster, Allen struggled mightily; his field goal percentage dropped from 46.6 to 39.5 percent and offensive rating dropped to 116.7 from 128.5 points the previous season. An ankle injury played a role in Allen's junior season being so cursed, leaving a more adverse pull-up shooter rather than a fearless attack at the basket kind of player.

Plus, the shine on Allen began to dwindle as teams figured out he can only go at one speed and one direction. His heavy feet and lack of innovation around the basket strips him of a crucial ally in his effort to score. Taking just 61 shots at the rim his senior year, Allen's numbers improved to 60.7 percent and shot a decent 35.4 percent on NBA threes on 175 attempts.

Trae Young of Oklahoma hit just 0.1% more from the same distance on 236 attempts. Allen's development as a shooter lead led to a respectful 49.4 percent on either of the wings. You can't say Allen suffers from the same advantages as most fourth-year players that explains their success or sudden rebound from a poor season prior, because Allen showed he can be a deadly shooter in the years prior.

Allen's usage took a dip after 2016, gradually falling from 26.8 percent to 20.7. So the numbers that are supposed to highlight his bounce back season is a bit misleading. Allen's decline at the rim can be attributed to the fact that the 2015-16 Duke team did not have a traditional center.

Amile Jefferson, the school's starting big played in just nine games, add that to the list of excuses for Allen coupled with his season-long ankle injury. Coach K lpayed small-ball in 2016, then with Giles and Jefferson back in the fold he returned to a more traditional lineup and Allen was forced to develop into more of a catch-and-shoot perimeter player.

So what's will Allen's role be in the NBA? I don't see him starting for any teams with playoff aspirations. He isn't J.J. Redick, his skin color and Alma mater is where the similarities stop. Perhaps as a near-the-end-of-the-bench guy, that can provide a spark off the bench in an offense that'll run sufficient pick-and-pop action for him.

He's an above-average shooter on the pick-and-roll and shoots with Marcus Smart level of irrational confidence. But Smart is also a capable defender. Allen shows the motor and willingness to compete at the same level of intensity as Smart, but is easily rattled when screened off his man and frequently gets lost during the possession -- which is odd considering how high his Basketball I.Q. is.

I struggle not to compare Allen to Detroit Pistons star Bill Laimbeer -- solely based off their ability to get under their opponents' skin, despite not being that good themselves. Allen compiled 172 assists his senior year, sixth best in the ACC, and sixth in total points scored (574) and a career-low in turnover rating, 20.7.

He can be a dynamic playmaker off-the-dribble when he goes to his right, frequently favoring that side of the court and hand. Conversely, when forced to go to his left hand or side, Allen is not as effective and problematic with the ball in his hands.

After his workout with the Celtics, Danny Ainge was so impressed he said Allen's smoothness is something that a lot of players have and that his character -- one known for being very competitive, chippy and controversial -- is exactly what he wants for the Celtics. If Boston were to select him, he would be reunited with former Blue Devil Jayson Tatum.

However, his NBA projection remains an enigma. The way I try to simplify the uncertainty is I ask, "Is he better than Abdul Nader?" -- a criteria where I ponder whether Player X is better or just more pleasant to watch than end of the bench scrub out of Iowa.

The answer is yes. But it's really close.