Celtics Options at No. 27: Dzanan Musa 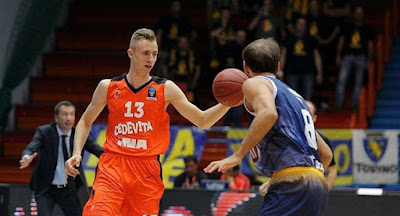 As we gear up for the 2018 NBA Draft, we'll be featuring a handful of  potential prospects the Celtics may be drafting with the no. 27 pick in the first-round...

Dzanan Musa aka "The Bosnian Gunslinger"

Every once in a while you fall in love with a prospect that's not the flashiest, most polished or highly skilled. That's typically what you see late in the first round, where there aren't many franchise game-changers. You're just trying to pick a player that can give you modest production.

Musa is a boom or bust kind of product. His ceiling is ultimately clear as is his basement. Musa can be described as a J.R. Smith kind of player with a bit more athleticism. Even his attitude and toughness will remind you the Cavaliers shooting guard.

Winner of three Croatian League championships (2016-2018), Musa was rated as EuroCups Rising Star and Adriatic League's top prospect. At an early age, he dazzled scouts participating in the 2015 FIBA Under-16 Championships, winning MVP honors and led Bosnia and Herzsegovina to its first title over Lithuania.

Musa scored a game-high 33 points to go with his eight rebounds and seven assists. Even in his formative years there were shades of J.R. in his game -- a younger, more agile version -- attacking the basket and splitting defenders.

On the floor, Musa features multiple facets to his game that Brad Stevens will need for him to unlock by getting over Musa's selfishness. Musa's calling care is scoring deep from long range, he also has a beautiful floater -- one similar to Mike Conley and Isaiah Thomas. His handles are very polished and advanced for a 19-year-old.

However, his dribbling is fantastic and Musa shows a real feel for the game, able to change speed at the drop of a hat. He able to make long strides to the basket while favoring his left side. Musa can pull going left or right out of the pick-and-roll but he'd rather commit to isolation rather than take advantage of mismatches in the switches.

This raises the question of how vast his Basketball-I.Q. is, whether Musa can see when there's an opening for him to attack through. It's increasingly frustrating to see him possess the tools of a dynamic offensive threat: a killer Euro-step, right-legged jumper and incredible reach for someone projected to be drafted this late in the first round.

Musa can grow into a solid rotation player under the correct guidance. There is the question of who he'll guard because of his thin frame leaves him as a target for bulkier modern forwards, I wouldn't be surprised if Musa plays a ton of minutes at the shooting guard position while his body fill out.

If Musa is still around at the no. 27 pick, I highly recommend the Celtics take a flier on him -- he's the most intriguing prospect for Boston.