Celtics rookie Robert Williams is Ready to Silence the Naysayers 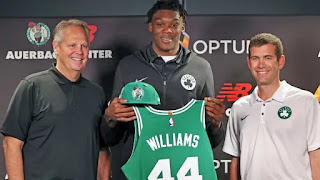 The Texas A&M product was formally introduced by the Celtics Friday morning alongside head coach Brad Stevens and president of basketball operations Danny Ainge. Williams, who was projected to be a lottery pick in last week's NBA Draft, says he isn't holding any grudges towards the teams that passed on him.

He's excited to play for the Celtics and believes he was meant to land in Boston.


"Their decision was their decision," Williams said about the teams that drafted before Boston. "My mama always told me everything happens for a reason and I feel like I landed in a great, great place. How I see it is only up from here."

Williams also addressed the critics who often question his focus and motivation. It doesn't bother him, he says, and now as a member of the Celtics, Williams is up for the task of putting in hard work for an organization with championship aspirations.


"People question my motor a lot," Williams said. "But I work hard, and I know I can work hard and I'm a hard-worker. Just being in this organization, like I said, knowing the morals of this organization and what it takes to be in this league definitely means a lot and I'm ready to start."

He started his first week in the city by reaching out to veteran All-Star Al Horford. Williams wasted no time in seeking out guidance from Horford, stating how much he enjoys Horford's game and studies it.


"I actually met him when I first got here, like two days ago," Williams said. "We had a quick conversation. What's most interesting about his game is Al doesn't rush at all, he takes his time. Some people say his moves are too slow, their efficient and they work so just studying his game from the dribble hand-offs to how he's coming up and attacking the rim -- it's all beautiful. It all helps me prepare myself."

Williams will be donning Ainge's old Celtics jersey -- no. 44 -- next season. The former Celtics guard chimed in on the topic of people questioning Williams' motor, explaining how much hard work goes into earning SEC Defensive Player of the Year honors.


"It's hard to have a low motor and be Defensive Player of the Year for two years in a row and tough confidence," Ainge explained. "I've heard the same type of criticism -- that's a hard thing to do as a young man."

As for maturity, Williams says maturing before entering the NBA was the biggest reason he returned to Texas A&M for a second season. A decision that was made after having conversations with his mother and the rest of his family.


"That was (the decision to stay a second season) just working on maturity on and off the court and a lot of that decision came from my family helping me," Williams explained. "My mom was a big part of it, she felt that I needed to mature more. Even if I didn't feel like that, just talking and sitting with them coming down to the decision is what led to it."

Now, as a member of the Celtics, Williams understands the culture he's a part of and the kind of work ethic that is expected of him.


"Obviously, Boston is a place that loves hard-workers. They love players that give it their all -- give the city and the team their all," Williams said. "So, hard work, dedication, doing things the right way. I feel like those are major keys."