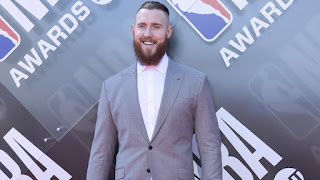 Heading into the night with nominations in two of the six major categories, the Celtics came up empty at Monday's 2018 NBA Awards.

Brad Stevens, who finished with the third most Coach of the Year votes, fell behind Utah's Quin Snyder and former the Raptors' former head coach Dwane Casey. Jayson Tatum also fell third behind Donovan Mitchell and honoree Ben Simmons in the Rookie of the Year voting.

While most anticipated Tatum's fate, the first-guard who led the Jazz to an improbable playoff berth this past season was better-suited for the honors. Whether you consider Simmons -- the 2016 first overall pick, who missed the 2016-17 season -- a rookie or not, Mitchell led Utah to the fifth-best record in the Western Conference this past season.

Also, he did it in a season when his All-Star teammate Rudy Gobert missed 26 games. Still, Mitchell's 20.5 points and 3.7 assists a game was good enough for second place.

Third time's a charm for Harden, who was a finalist the last two seasons but lost to Russell Westbrook last year and Steph Curry the year before that. Harden now joins the list of MVPs -- one that includes his former Thunder teammates Westbrook and Kevin Durant on it. The trio has won three of the last five years.

Aron Baynes was the lone Celtic in attendance. He was on hand to accept hardware awarded to any members of the Celtics and had a low-key night.