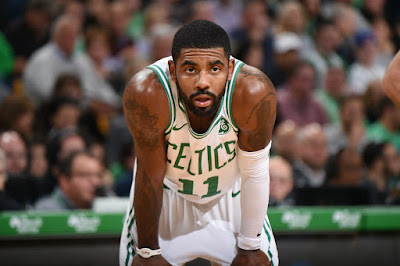 With only one year left on his current deal, Kyrie Irving will be one of the most sought after free agents in 2019.

Yahoo Sports' Chris Mannix weighed in the All-Star's pending free agency Thursday on his podcast, where he expressed the Celtics' concerns about whether Irving will stay in Boston long-term. Mannix even went as far as mentioning the Knicks as a legitimate threat to sign Irving next summer.


"I think they're scared," Mannix said. "I think they're scared and should be scared to some degree of Kyrie Irving walking in 2019. I know he had a great year, but you know there are people in Cleveland that will tell you that the Knicks should be considered a real threat for Kyrie Irving. Because Kyrie had talked about it, about playing with the Knicks with some players in that Cleveland locker room, from what I was told.

"You know things can change. Obviously, you go to Boston and you become the face of the franchise. You're on a winning team. Maybe the mindset has changed significantly?" [NBC Sports Boston]

Earlier this week, the voice of the Celtics and play-by-play announcer Mike Gorman caused a stir, when he made comments regarding if he thought Irving could be traded, especially because of the All-Star's history of injures.


"I think Kyrie’s record over the course of his career would tell you that injuries have been a problem," said Gorman. "I think you have to be smart here and look at what the facts are, and understand that they may be a problem going forward too."

Celtics president of basketball operations Danny Ainge will explore all of his options heading into the 2018-19 season. If we learned anything from last year's off-season it's that Ainge isn't afraid to trade anyone from his roster.

After seeing him trade Isaiah Thomas -- the second-best scorer of the 2016-17 season who led the Celtics to the Eastern Conference Finals -- last summer, it's tough to rule out any potential trade involving Irving. Similar to Thomas, Irving is on the final year of his contract and is coming off of a season-ending injury.

The uncertainty of Irving sticking around long-term could force the Celtics to strike a deal in exchange for Irving rather than end up with nothing if he ultimately decides to play elsewhere next summer.

Although Irving's minimally invasive procedure that forced him to miss the final two months of the Celtics season could have no lasting effects on his game next year, his trade value could ultimately keep him in Boston for the foreseeable future.