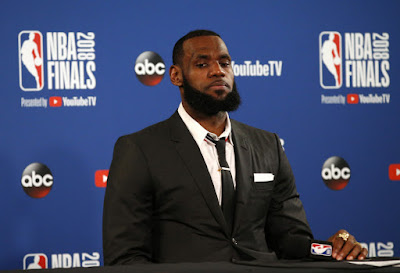 The Cleveland Cavaliers are one game away from getting swept out of the NBA Finals by the Golden State Warriors, and the only thing that is being talked about is where LeBron James' heading to this summer.

ESPN's Stephen A. Smith made headlines a few days ago, when he named seven teams that reportedly James will have a conversation with in the next upcoming weeks.

On "First Take," Smith included the Rockets, Lakers, Cavs, Warriors and Celtics are among those teams James plans on talking to after July 1.

When it comes to actually landing LeBron James, ESPN.com's Chris Haynes believes there are a couple of destinations to consider.

Both the Raptors and Celtics, who finished the 2017-18 campaign with the East's first and second best record respectively, don't have enough cap space to simply sign James without making moves to clear out salary.

The Celtics, for now, still have Kyrie Irving, who requested a trade out of Cleveland last year, so he wouldn't have to play in James' shadow anymore. Boston would more than likely have to move Irving, along with others, as part of a sign-and-trade scenario if they were serious about acquiring James' services.

James and the Cavaliers beat the Celtics in a decisive Game 7 of the Eastern Conferance Finals nearly two weeks ago.

As for the Raptors, they have never signed a free agent like James in their franchise's history. Toronto has also been swept each of the two last postseasons by the Cavaliers.

While the main contenders for James bringing his talents to have always been the Lakers, 76ers and Rockets, it will be interesting to see what other rumors and or reports surface as possible landing spots for arguably the best player in the game, as his playing career winds down.