Kyrie Irving on Brad Stevens: 'one of the most adaptable coaches that I’ve ever been around' 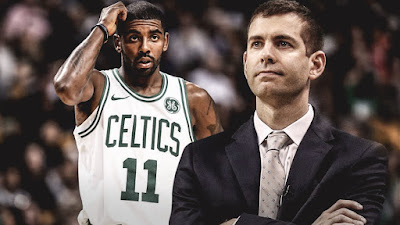 While Kyrie Irving's name is being mentioned in trade rumors, the Celtics All-Star for now, continues to promote his movie debut 'Uncle Drew' on a mini-media tour.

Before making an appearance on the MTV 'Movie and TV Awards' on Monday night, Irving granted a few interviews over the weekend, as he spoke about his first year playing in a Celtics uniform, Brad Stevens and of course his future in Boston.

Irving was nothing short of being grateful when talking about having a smart coach like Stevens.


"Brad is one of the most adaptable coaches that I’ve ever been around," Irving said on a recent episode of the Bill Simmons Podcast. "He’s just highly intelligent, about the game, about life. And talking to him is always awesome.

"I just had dinner with him the other night – him and his wife and his kids – and talking basketball with him is such a relief. To have a basketball mind like that and a appreciation for the game [is impressive]. [He] doesn’t forget plays. The shift in the game happens, and we were going over things that could have been done differently, and it was just a breath of fresh air talking to him."

Last week Irving was asked about his future with the Celtics during a press conference in Boston, stating that signing an extension this summer just would not make sense financially.


"My hope is that maybe we could limit it to maybe one question a day about what I'm doing next year," Irving half-joked to reporters. "That's my hope. But obviously I can't really control that.

"I think you guys can feel my attitude is really just redemption next year. Really integrating myself with our team again and really focus on winning a championship. That's the only thing I'm really worried about. Until I get to that point, then I can't really answer any questions. I'm pretty sure management and I will have a talk, but that talk won't happen now."

Later, Irving added, "The focus is solely on winning a championship next year. I don't think [impending free agency will] necessarily have an effect. I'm doing my best to kind of deflect all that and focus on what's in front of us."

In an interview with Kelly L. Carter of  The Undefeated, Irving was once again asked about a possible long-term future with the Celtics, which he feels like he doesn't have to directly answer until next summer when he can opt out to become a free agent.


“We have an incredible organization. I think we’ve positioned ourselves for the future, and we’re taking steps in the right direction. I’ve been transparent with [Celtics general manager and president of basketball operations] Danny Ainge. Transparent with the ownership of what my intentions are going into this season. And after the season, what conversations are going to be needed to have in order for us to get on the same page. What I really want, which is to bring our team, all of us together, to a championship with us all being healthy. That’s where my focus is, and when that time comes, I’ll be ready to answer.” [The Undefeated]

With reports that Kawhi Leonard wanting out of San Antonio and that Danny Ainge being interested in trading for the Spurs All-Star, Irving might not get the opportunity to redeem himself in a Celtics uniform during the upcoming 2018-19 season.


Listen to our discussion below on what the future holds for Kyrie Irving in Boston: