Kyrie Irving says focus is on 'redemption,' winning a championship next season 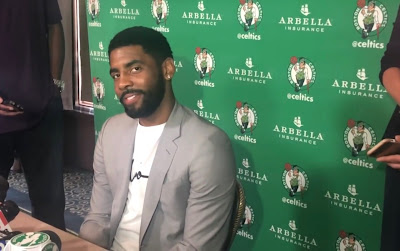 Kyrie Irving spoke on Tuesday afternoon, while rumors have been swirling around as of late surrounding his future in Boston, the Celtics All-Star assured the media that he is focused on getting healthy in time for the start of next season, while helping his team towards winning a championship.

Irving met with local reporters at the Boston Harbor Hotel, for the first time since his 'minimally invasive' procedure on his knee back in March and talked about a promo tour of his movie "Uncle Drew," among other topics, such as being sidelined during the Celtics postseason run, his potential future in Boston, the challenges of facing the Golden State Warriors and management's decisions to make roster changes, that include the possibility of reuniting with LeBron James.

The Celtics point superstar point guard, who wouldn't comment about a long-term future as a Celtic in a recent interview, is eligible for an extension this summer, despite another knee surgery that kept him out of Boston's run to within one win of an NBA Finals berth, Irving was adamant that he'll wait for next summer to examine his options.


"My hope is that maybe we could limit it to maybe one question a day about what I'm doing next year," Irving half-joked to reporters. "That's my hope. But obviously I can't really control that.

"I think you guys can feel my attitude is really just redemption next year. Really integrating myself with our team again and really focus on winning a championship. That's the only thing I'm really worried about. Until I get to that point, then I can't really answer any questions. I'm pretty sure management and I will have a talk, but that talk won't happen now."

Later, Irving added, "The focus is solely on winning a championship next year. I don't think [impending free agency will] necessarily have an effect. I'm doing my best to kind of deflect all that and focus on what's in front of us."


"I could't be more proud of what [Boston's young players] experienced -- I mean they went to Game 7 of the frickin' Eastern Conference finals," Irving said with a playful shrug.

"For me, I'm just glad everyone got to learn how special they were on a bigger stage. I'd been talking about how great [the younger players] were. Some of their numbers probably didn't look as appealing to the outside-looker, but they were just -- they were always locked in. And then when they were afforded the opportunity to take the reins of the team, you saw them take full advantage of it. You saw guys that literally are going to be stars in this league for years to come."

Irving also added that his back-up, Terry Rozier, proved he's an NBA starter and that "turns into an unbelievable dynamic" for Boston next season. He's excited to work with the young talent of Jaylen Brown and Jayson Tatum, then noted how Marcus Smart gave up his body on multiple occasions and "that's the type of attitude and effort you'd love to be part of."

Irving had a big wide smile when he referenced Hayward, "and now getting my man Gordon back -- I'm excited man. I'm excited."

When asked about James, Irving didn't deflect on the possibility of his former teammate opting out of the final year of his current deal and the Celtics being a dark horse in acquiring the former league MVP.

Though Irving said he hasn't had any conversations with Boston's front office about James, he did appreciate the transparency of the team's brass as they continue to map out the future.


"In this business, I've experienced it all and I've seen a lot, so we'll see what management decides," Irving said when asked if he'd be open to reunite with James in Boston.

While Irving has not begun running yet, he is clearly aware of his target date as training camp is set for the end of September.


"Me and my strength and conditioning coach, we're taking it one day at a time. I think around this time is probably 15 weeks until the third week in September --- not that I'm thinking about it or anything -- so I'm excited to just really utilize this offseason to dedicate myself to my craft and things outside of it," Irving noted.

When watching the approximate 12-minute presser, it seems like Irving was in good spirits, despite the rumor mill on high speed, he's preparing for the release of his film debut and he continues to rehab his knee, to hopefully have a great comeback season in Boston.

For now, this may put the rest of Celtics nation at ease, while they continue to trust Danny Ainge on whatever he decides for this current title contending roster going forward.