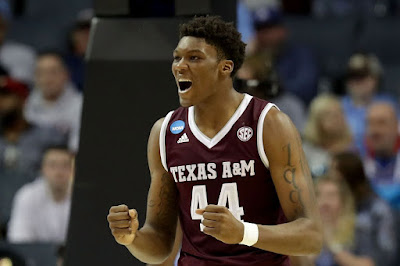 The Celtics were forced to reschedule their conference call with rookie Robert Williams Friday morning.

Originally scheduled for 11:00 a.m., Williams' conference call with the Boston media was postponed to noon. The first-round pick said he overslept at his aunt's house -- where he spent Thursday night after a Draft party at Buffalo Wild Wings in Shreveport, LA.


"Right after the draft I actually ran to my aunt's house and went to sleep because I was so tired from everything," Williams admitted. "When I woke, my sister was like, 'You had a conference call.'"

Reports of Williams' motivational issues heading into the draft is the biggest reason why many speculate he dropped as low as no. 27. He was originally projected to be a lottery pick, but instead he nearly dropped into the second-round before the Celtics took him towards the end of the first.


The newest member of the Celtics didn't head into the draft with a clean slate.

Williams was suspended for the first two games at the start of his sophomore season last year for what Texas A&M called "violation of university policy."  Despite the doubts from a number of NBA teams that passed on him Thursday, Williams is still confident he can make an impact at the pro level.


"You always have people that doubt you," Williams said. "I know that I'm definitely going to make a lot of noise when I get there."

Much like many Celtics fans, Williams is excited to start his NBA career in Boston. Joining one of the best defensive teams in the league, Williams' defense-first mindset is expected to fill a void in the front court as a potential rim protector -- a kind of player the Celtics haven't had on their roster in a long time.

Williams is ready for the challenge, he says.


"I feel like I love defense," Williams said. "I feel like most of all I thrive off defense, a defensive stopper. And I feel like the energy the Celtics have on defense is the excitement. From simple hustle plays, as far as diving on the floor for the ball. It really gets the team and the fans going. And I feel like I can definitely bring a lot of energy from that perspective."

The Celtics will formally introduce Williams next Friday.

Click the video below to see Brad Stevens' press conference moment after the Celtics' lone pick in Thursday's NBA Draft.