Celtics Options at No. 27: Bruce Brown 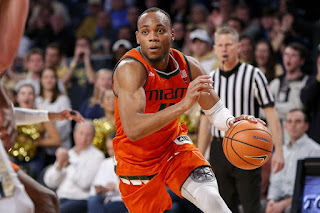 We'll surely keep Brown's Draft stock down at his advanced age, which will be 22 by mid-August. His sophomore campaign was limited to 19 games after suffering a foot injury in late January and went under the knife the following month.

As a freshman, Brown shot a respectable 34.7 percent from 3-point land, the subsequent season it fell to a horrendous 26.7 percent. In the two season spent in Miami, Brown developed a quicker release that's more appealing to the eye, sometimes his elbow will flare out.

He is lacking a natural touch on floaters and rarely gets to the free-throw line. Brown's shot selection is very poor, loves to pull-up in the mid-range but hits just 30.4 percent on two-pointers, per Hoops-Math.

To add on, Brown is a liability at the three-throw line too -- his percentage fell from 74.4 percent to 62.9. Frankly, I'm unimpressed with Brown as a prospect, however, the Celtics did ask Brown to come back for a second workout days before Thursday's draft.

What is impressive about his offense is his quick-twitch, which allows him to explode in traffic for electrifying dunks and black on the opposite end of the floor. Brown is a brick wall, similar to Marcus Smart -- he won't allow you to just blow past him.

His lengthy arms and strong frame gives him the ability to take on skinny wings even though he is lacking lateral quickness. Brown is a respectable runner of the pick-and-roll. The advanced analytics aren't friendlier to Brown, converting his spot-up possessions to just 0.783 points per possession which is good enough for the 29th percentile.

While his ball-handling is a work in progress, he did average four assists per game against 2.3 turnovers. Brown also struggles around the rim despite his terrific wingspan. It's astonishing a veteran collegiate prospect is entering the pros so unpolished.

He's well-versed on defense, will always make the proper rotation and had a defensive rebounding rate of 20 percent -- which is fantastic for a guard. Upon entry to the NBA, Brown's role will be a fifth string guard (behind Jabari Bird), if most of the roster returns next season.

I cannot see a reason why Boston would want to go through the same growing pains with Brown, especially with better alternatives left on the board.