Celtics Options at No. 27: Jalen Brunson 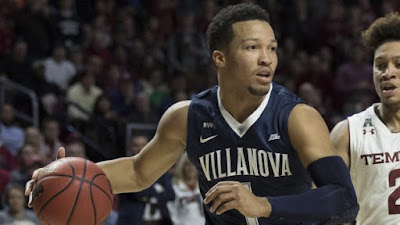 Jalen Brunson may possibly turn out to be the best player from the championship Villanova team in this year's draft class -- one that features lottery pick small forward Mikal Bridges. Brunson's age is the lone concern.

He will be turning 22 this summer, but his time at Villanova was well spent polishing his game and developing himself into a fine threat from nearly all spaces of the floor. Shooting a hot 60 percent from inside the arc and 40.8 percent from deep, he showed his ability to draw contact and got to the free-throw line -- where he averaged four attempts per game last season as a Wildcat.

Brunson's calling card is his responsibility when given ball-handling duties. Not only is he lethal out of the pick-and-roll but he rarely turns the ball over. He averaged only 1.8 turnovers a game in his last season after averaging 2.1 the season before.

Coupled with his advanced footwork and a good post game, Brunson offensively is someone that shouldn't be underestimated despite lacking agility. A facet of his game that will need some polish is his ability to finish but with an unimpressive wingspan (6-foot-4), there's not much he can do to improve.

Defensively, there's a real limitation to his effectiveness. Still, Brunson defended spot-ups reasonably well, allowing just 0.85 PPP, it can be easy to screen him off. His body build is ready for the pro level, his Basketball-I.Q. is ready to run the offense and will play extremely hard on both ends of the floor.

The Celtics locker room is fulled with similar players, and the brass should add this one to their roster.