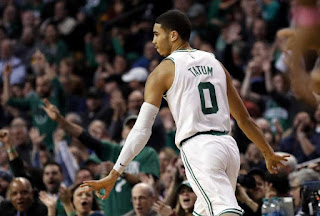 When Jayson Tatum entered his first pre-draft workout with the Celtics, Brad Stevens noticed something about him that he didn't see in the other 2017 draftees.

Much like we've seen from him throughout the first 25 games of his NBA career, Tatum's confidence in his shot was the first thing that jumped out to Stevens. It wasn't solely because the 19-year-old rookie made one shot after another but rather because he made it look so easy.


"The thing about him is when he came in for his workout, he made a lot of shots and it looked effortless," Stevens explained after Monday's win over the Bucks. "That's usually a pretty good sign. It didn't look like it was just one of those days where he was just hitting everything. He would miss two in a row and it wouldn't dissuade him from hitting the next one. He had no thought about making the next five, he just kept shooting. Like I said -- for a guy with his frame, he shoots it effortless. He's gonna be able to shoot it deeper, he's gonna be able to make it off running once he gets a little bit stronger and more used to everything else. He's gonna be one heck of a shooter."

It's been Tatum's short-term memory that has led to him becoming the league's most accurate 3-point shooter. Whenever he misses a shot, it doesn't discourage him from taking another shot -- a hurdle a lot of NBA rookies tend to deal with in their first season.


"It's just repetition," Tatum said when asked if he had changed his form at all since arriving to the NBA.

However, before pre-draft workouts, Tatum says he worked to improve his jump shot every day and used the thought of being a top-3 pick in the draft as motivation.


"I worked on [shooting] day-in and day-out, trying to get drafted as high as possible," Tatum said. "I was working on the things that people said I couldn't do well, and shooting threes was one of them."

With the league's best 3-point shooting percentage (51.3 percent), Tatum is now 39-of-76 from behind the arc and has become a vital offensive weapon for the Celtics while in the process, impressing his teammates.


"It was awesome," Al Horford said after Monday's win. "I think that they were trying to deny the corner and Jayson was trying to play the right way and hit that extra pass but they were actually baiting him to shoot the ball and he just wasn't hesitating. He was right there with rhythm. They closed out, he took a dribble. He took his time. It was just a lot of fun to see him have some success early and I feel like because of those three's, he kind of opened the game up for the rest of us."

After hitting 4-of-4 in the opening frame, guys like Kyrie Irving and Horford found their offense while Tatum, much like he's done all season, was an outside threat for the Bucks. His mere presence opened the floor for his veteran point guard and forward when Milwaukee was forced to stick a body on him.

Tatum has been putting up solid numbers in other statistical categories as well, he's averaging 14 points a night and has the second-best field goal (51.1 percent) and free-throw percentages (82.8 percent) among rookies.