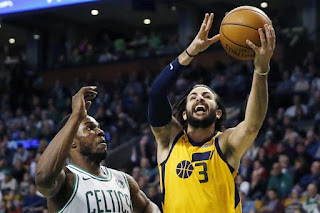 While the Celtics have been outplayed throughout a lot of first halves this season, the Jazz turned up their intensity in the second half and the result was a double-digit win.

Utah used a 25-13 second-quarter advantage to catapult a significant second-half surge that put the Celtics away earlier than any of them anticipated. The Jazz topped the Celtics, 107-95, handing Boston its second loss in three outings.

If the Celtics weren't taking the Jazz as seriously as they should before halftime, Utah's 18-7 run to open up the second half certainly put Boston on high alert. The scoring outburst gave the Jazz a 64-48 lead after Rubio hit a 3-pointer less than five minutes in and Utah eventually grabbed a 17-point lead -- their largest lead of the night.

Utah used a well-balanced attack to get the best out of the Celtics, including two players off the bench that combined for 34 points. Former Celtics Jonas Jerebko and Rodney Hood each scored 17 points while Ricky Rubio scored a team-high 22 points. Rookie Donovan Mitchell also poured in 17 and to go with his 9 assists, and hit some big shots down the stretch.

Kyrie Irving turned in another efficient night (33 points on 11-of-25) alongside Al Horford (21 points on 9-of-14) but they didn't get much help from their teammates. The third and fourth leading scorers each scored 7 points (Jayson Tatum, Semi Ojeleye) and the Celtics couldn't string together stops in the final frame.


"Bottom line is you have to be locked in," Brad Stevens said after the loss. "You have to play well. You have to do what you do best and we have a lot of guys that really didn't play well. We got out-coached, we got outplayed and we haven't been in that situation very often as far as, like, from an effort stand point but I think twice this week we have so that's concerning."

The Celtics managed to even the score in the fourth quarter but it did little slice their deficit, which in the end was a 12-point defeat. Boston will have little time to dwell on their rough loss as they head to Memphis to take on the Grizzlies Saturday night.

After Rudy Gobert went down minutes into the first quarter and didn't return, Derrick Favors joined him in the Jazz locker room, yet, Utah managed the out-rebound the Celtics, 55-31. Lack of hustle and being out-played was an accurate description from Brad Stevens and they're going to have to change their ways if they want to bounce back with a win against Marc Gasol and the Grizzlies.