Danny Ainge on Gordon Hayward: Close to 'being permanently' out of walking boot 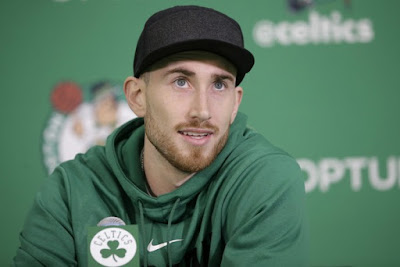 Gordon Hayward will soon shed his walking boot, according to Celtics president of basketball operations Danny Ainge, who made his weekly appearance on a Boston sports station Thursday morning.

Hayward’s wife, Robyn, posted a video of the injured Celtics All-Star on Instagram earlier this week, causing an uproar of Hayward’s progress so far. Ainge said Hayward is “right on schedule,” without offering a timetable on basketball related activities, while both have said that no one should anticipate a return to the court this season.


“He’s progressing along. He can take the boot off for short periods of time,” Ainge said. “But he's doing really well. His therapy is going great. He's right on schedule. He’s doing sometimes two workouts a day and trying to get stronger. The next phases are getting out of the boot completely, but I still think that he’s a couple weeks away from being permanently out of the boot.” [CBS Sports Radio]

Ainge was asked if during any conversations had with Hayward, has he expressed a desire to return this season.


“You know, he hasn’t expressed that. Just knowing professional athletes, I know that down inside he wants to be back faster than anybody has ever been back from this kind of injury. He’s got a competitive streak to him. He’s asking lot of questions, he’s got good people around him. He’s diligent in his rehab.

“I know what’s going on in his mind, but I don’t think he’ll say anything about how fast he wants to get back.” [CBS Sports Radio]

On Wednesday night, prior to the Celtics win over the Dallas Mavericks, coach Brad Stevens did acknowledge that he heard about the Instagram post that had gone viral, but had not viewed the video


“He wears the boot until a certain time every evening and then he can take it off,” Stevens said. “When he moves around, he can move around with a brace that's like a boot. He is progressing and doing what he can do, what he's been cleared to do. It's been going well. He still wears a boot when he comes over to the gym, he's wearing the boot for most of the day.” [ESPN Boston]