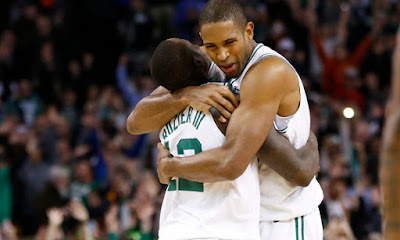 Can you ever really count this season's Celtics team out of a game?

The Celtics have crawled their way back into so many games throughout the season but none of them came close to matching what transpired Thursday night.

Boston faced its second biggest deficit of the season -- a 26-point first-half hole -- where the Celtics looked outmatched on both ends of the floor. But a turnaround third-quarter performance from Boston set the stage for a big finish in the fourth quarter as the Celtics made defensive stops, went on a scoring run and eventually turned to Al Horford, who gave his team their first lead of the night -- a 99-98 advantage with 3.7 seconds left and it was enough to seal the win.

The Rockets only needed three minutes to put together a 12-0 game-opening run and Houston formed a virtual wall on defense; it didn't let up at the rim, altered attempts from the perimeter, and forced 8 first-quarter turnovers. The Rockets matched the same amount of first-quarter points tacked on by their from behind the arc (4-of-12 from 3) and took a 32-12 lead into the second quarter.

MVP candidate James Harden finished with a double-double (34 points, 10 assists) and Eric Gordon added 24 points. The back court duo connected on 9-of-29 from deep.

By halftime, the Celtics trailed the Rockets, 62-38 before putting together their strongest quarter of the night. Behind a 22-4 run, the Celtics fought their way back into the game -- cutting what was once a 26-point hole, down to six (74-66). And in the fourth quarter the Celtics continued fighting.

Houston managed to stretch its lead out to double figures early on in the final frame but back came the Celtics as they trimmed their deficit back down to four and then eventually to two points (92-90). Tatum created back-to-back defensive stops on Gordon before Irving split a pair of free-throws just before the two-minute mark.

Boston's leading scorer then had another chance to tie the game but missed a contested layup with under a minute left before Tatum made yet another pair of defensive stops -- this time it was on Harden. Tatum blocked his 3-point attempt on one stop and stole the ball on another, the Celtics however, loss possession and a loose ball foul sent the P.J. Tucker to the charity stripe.

Tucker split the attempts, (96-93), which gave the Celtics an opportunity to tie the game. Out of a timeout, Stevens elected to a quick layup from Smart and foul (Harden made both free-throws) and then turned to Tatum for a quick dunk, which set up the play of the night.

Smart, who was defending Harden on the inbound, drew an offensive foul that led to Horford's go-ahead hook shot with seconds left on the clock. Smart then drew another offensive foul on Harden, which eventually slammed the door on Houston's hopes of a dramatic finish and concluded Boston's most impressive win of the season.

The Celtics have made a number of comebacks this year but nothing quite like this. They improve to 29-10 on the season and will look to close out 2017 with win No. 30 on New Year's Eve against the Nets at TD Garden.

After committing 8 first-quarter turnovers, the Celtics doubled up in the final three quarters and turned things around in the second half. Boston shot 45 percent from the floor, while the Rockets shot less than 30 percent after halftime and relied heavily on their outside shooting -- which cooled off from the first half. Houston entered Thursday's game averaging 15 made 3-pointers a night, they made 14 against the Celtics but it took them 43 attempts to get there.