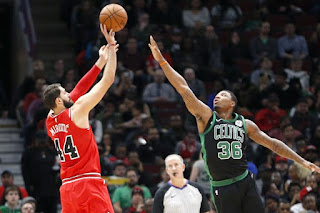 After nearly 28 games of stellar performances, the Celtics were due to put up a dud sooner rather than later but a spanking by the hands of the Bulls in Chi-Town wasn't necessarily ideal.

The Bulls (6-20) entered Monday's game with the league's worst record and walked out of the United Center with their sixth win of the season in an old fashion blowout over the Celtics, 108-85.

Chicago showed strength on both ends of the floor. They not only sustained a 48 percent shooting clip throughout the night, they also rattled the flow of the Celtics' offense by contesting jump shots and protecting the paint.

The Celtics were without Kyrie Irving, who was ruled out (quad) before tip-off, and Marcus Morris, who continues to nurse his left knee. Still, the Celtics offensive execution was inexcusable throughout crucial moments and the effort on the defensive end failed to resemble its proven identity that we've seen throughout most of the regular season.

The Bulls spent much of the night forcing Boston to shoot their way out of their deficit and the Celtics couldn't resist. They attempted 40 shots from behind the arc and only drained 10 of them.

Al Horford (15 points, 5 assists) was decent, his offense came and went but he struggled in defending the perimeter when Nikola Mirotic and Bobby Portis started cooking from deep. Marcus Smart (13 points) connected on his first three attempts from the 3-point arc in the first quarter but then struggled the rest of the night on 2-of-9 from the field.

And after the Celtics youngsters -- Jayson Tatum, Jaylen Brown -- found some offensive momentum in whizzing by their defenders and finishing at the rim, the Bulls adjusted and forced them into becoming strictly jump shooters. Tatum pulled down 10 rebounds but finished 1-of-7 from the floor, him and Brown (13 points) were a combined 3-of-11 from outside.

Meanwhile, Nikola Mirotic (24 points) and Bobby Portis (23 points) made it rain from deep -- they connected on 6-of-10 from outside while leading the Bulls in scoring. After giving up an early seven-point lead, the Celtics played catch up throughout the night thanks to an abysmal second quarter where the Bulls outscored Boston, 28-13.

Portis had 19 of his 23 points through three quarters before the Bulls took a 15-point lead (78-63) into the fourth. Chicago's duo did their damage from inside and outside of the arc, while getting help from David Nwaba (13 points, 6 rebounds), who finished with a game-high plus-30 player rating, and second-year guard Kris Dunn (12 points).

The Celtics end their three-games in four days road trip, 1-2, before they head home to host the Nuggets at TD Garden on Wednesday.

The box score doesn't justify the kind of effort the Bulls put forth to pull off this upset against the Celtics. The shooting percentages from both teams tell the story of how well Chicago defended Boston while the Bulls ran a fluid offense that the Celtics were one step behind on nearly every defensive possession. The Celtics shot under 40 percent (39.8) for the first time in December while the Bulls made nearly half of their shots.