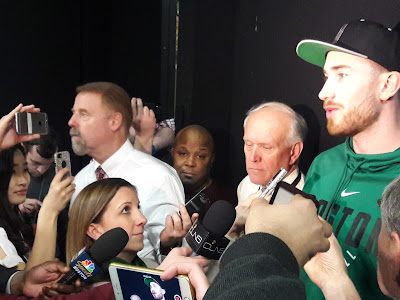 Moments before the Celtics and Jazz were set to tip-off at TD Garden, Gordon Hayward was seen roaming the hallways in a new protective ankle brace.

Hayward, who had his walking boot removed earlier this week, gave the media an update on his rehabilitation process. Hayward says the new brace is a big step in his road to recovery while adding that he does believe he can make a comeback this season rather than next.


"[The brace gives me] more mobility, I'm able to walk around without as much help. I'm able to do a lot more stuff rehab-wise like standing up so I don't have to shoot in a chair anymore," Hayward explained. "Slowly but surely, I'll keep adding to that but right now it's doing stuff with the bike -- slowly progressing to using a little bit of both legs and then the next step is both legs running and all that stuff so we'll get there."

Is there any chance you can come back this year?


"My mind is open to that. I'm trying to get back as fast as I can," Hayward said. "It all depends on how I feel -- taking it day by day, goal by goal. We'll see. We'll see what happens."

Hayward mentioned that while the goal originally was to start coming to the games more often after having his walking boot removed, he also plans on traveling with the club when he's further along in his recovery.


"I'll expect to travel when I'm able to," Hayward said. "Right now my focus is rehab and trying to get all the right training, the right work."

Hayward also added that there isn't a timetable set for when he can walk without the protective brace, his sole focus is on getting through rehab and making a surprising comeback. He also said he grabbed dinner with former teammate Joe Ingles Thursday night and plans on visiting the Jazz' locker room after the game.

He also added that while the off-season decision was a tough one for him to make, he still believes he made the right choice, regardless of the unfortunate circumstances of what happened in Cleveland on October 17.