Heat 90 - Celtics 89: Kelly Olynyk scores a career-high in his return to Boston, leads Miami to a win 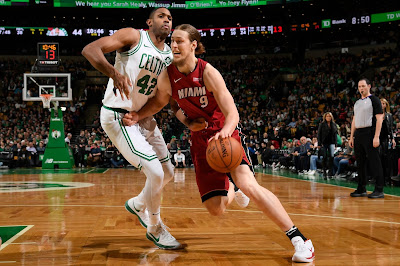 Boston's offense was ugly, and the defense was atrocious before Irving put the Celtics on his back and took them to the final second where he missed the potential game-winning field goal as time expired. Meanwhile, old friend Kelly Olynyk had members of his former team jumping on every pump-fake, biting on every jab-step and was one step behind on every made 3-pointer as he led the Heat to a 90-89 win over the Celtics.

With the Heat holding onto an 11-point lead with 2:45 left to go, Irving was incredible -- scoring six points in 24 seconds, including a four-point play that shifted the momentum into the Celtics' hands. After Boston made a defensive stop on the other end it was Irving who found Jaylen Brown behind the arc for an open 3-pointer off a behind-the-back pass that gave Boston a fighting chance as they shockingly sliced their deficit down to three points.

Out of a timeout, Heat coach Erik Spoelstra took a play out of Brad Stevens' 2016-17 playbook when he set up a play for Olynyk off an inbound pass that ended with a driving layup attempt that got him to the free-throw line. The closest the Celtics came to pulling ahead in the final two minutes was when Irving's driving layup pulled his team to within one point before missing a contested elbow jump shot that would have sealed the game for the Celtics.

Instead, Boston is now faced with the task of figuring out why the defensive stops didn't come sooner and how they will the offense learn to perform at a high level without its star player putting up ungodly fourth-quarter offense.

Irving finished with a game-high 33 points, Brown added 16 points and Marcus Smart's 15 points and 6 rebounds led the second unit. Olynyk finished with a career-high 32 points, including 6-of-8 from behind the arc and Josh Richardson added 19 points to go with his 6 assists.

Smart's 3-pointer with 6:52 got the crowd at TD Garden going but when he hit another from deep at the five-minute mark that pulled his team to within four, the crowd was electric before Irving went into destruction mode. However, when the Celtics needed to string together defensive stops, they failed to buckle down against Olynyk and Richardson.

It was a sloppy display of basketball from both teams in the first half but things seemed to click after halftime when Miami's offense found its rhythm in the third quarter and pulled ahead of the Celtics. The Heat turned an eight-point deficit into a nine-point lead (62-53) towards the end of the frame before the Celtics went on a quick 6-0 run and pulled to within three points before the final frame.

In an attempt to revive the offense, which was shooting at a 33 percent clip heading into the fourth quarter, Stevens turned to a three-guard lineup (Smart, Rozier, Larkin) alongside Horford and Ojeleye but it didn't work as the mismatches worked in the Heat's favor. Richardson hit mid-range jump shots before Olynyk drained a pair from deep and Miami eventually pulled ahead by 12 points.

The Celtics were outscored 26-15 in the third quarter.

Stevens talked about his concerns with his offense after the game.


"I'm concerned with the way we stare at plays (on offense) instead of moving the ball," Stevens said after the game. "When we do that we're not a very good team."

The Celtics are in the midst of a gruesome schedule (12 games in 18 days) but Stevens isn't using it as an excuse, nor is he blaming the fact that his team hasn't had a lot of time to practice throughout the tough stretch. And it doesn't get any better as Boston will travel to New York to take on the Knicks on Thursday night.

If they're going to put together a strong outing it's going to take someone else not named Irving stepping up in the fourth quarter and it's going the defense is going to need stay consistent, otherwise, they could be in for another disappointing outcome at Madison Square Garden.

Jayson Tatum, who finsihed with 11 points and 7 rebounds, dislocated his right pinkie when it was stepped on while diving for a loose ball at the start of the first quarter. The Celtics rookie got it tapped up and returned to bench before the end of the period, he plans to play Thursday aganist the Knicks.

The C's honored old friend Kelly Olynyk during thier "Hero Among Us" portion of the night at the TD Garden, for doing over 100 community apperances and help raising thousands of dollars for the team's Shamrock Foundation over his four-years in Boston.


"I think it's a fun way to honor. It's bigger than what you do on the court," Brad Stevens said before the game. "He embraced that, and I thought he lived that out well. It wasn't just talk when the cameras were on. He was out all the time."

Olynyk recieved a standing ovation early in the second quarter after a tribute video of his events was shown on the jumbo-tron.