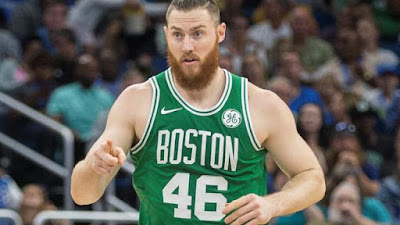 Aron Baynes, who celebrated his 31st birthday on Saturday, has been listed as probable when the Celtics take on the Pistons in Detroit later on this afternoon.

The 6-foot-10 center took a knee to the stomach in Friday night's lost to the Spurs in the fourth quarter and did not return to finish the game.

If Baynes is available, he will most likely start in Brad Stevens' lineup to matchup against Pistons center Andre Drummond.

The Celtics will look to avoid back-to-back losses since Oct. 18 and avenge a Nov. 27 defeat to Detroit at the TD Garden, where Baynes finished with 6 points and 6 rebounds in 12 minutes off the bench.


“That’s the game now,” Baynes said. “You have to be able to guard different guys now. That’s what I try to do, stay in front of them, make them take tough shots. At the end of the day, taking pull-up two's and contesting it, that’s the best thing statistically for our defense.” [NBC Sports Boston]

Baynes currently has a defense rating of 91.5, which leads the NBA.

Tip-off between the Celtics and Pistons is at 4 PM from Little Caesar's Arena.