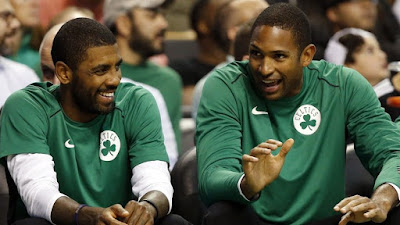 Celtics big man Al Horford talked about the difference between having Kyrie Irving as his point guard instead of Isaiah Thomas before the Celtics took on the Suns at TD Garden on Saturday.

While the two All-Star point guards share the ability of scoring at a high level, Horford talked about a particular facet of Irving's game that separates him from what Thomas was able to do last season.


"Both guys are very aggressive, can really score the ball," Horford explained. "Probably the only difference, or one of the differences that I see is Kyrie has that ability to post the ball. He's surprised us with that -- being able to get in the lane and be comfortable scoring in the post and I think that'll be one of his strengths as the season continues.

Horford also talked about what the Celtics learned from their 16-game winning streak.


"Just the focus we need to have to come out every night and play the same way -- have the same level of focus," Horford said. "[We have to] respect each team and go out there and do things the right way."

Click the video below to watch the entire exclusive interview with Causeway Street's Josue Pavon.