James Harden complains about officiating in Celtics' win over the Rockets 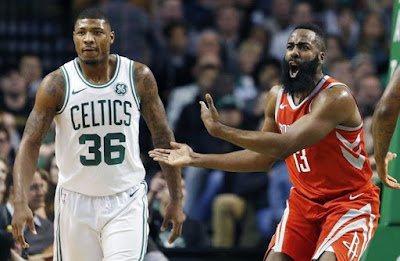 Rockets All-Star James Harden expressed his frustration with how Thursday night's game between the Celtics and Rockets was officiated while also accusing the referees of missing calls he claimed should have been whistled against Boston in final seconds of game.

It was an unlikely scenario for both teams. Thursday night's 99-98 Celtics win over the Rockets was called by only two officials; Tony Brothers and Gedimindas Petraitis. NBA referee Mark Lindsay, who was originally scheduled to call the game along with his two counterparts, suffered from a sore back and was ruled out.

Harden, who picked up two crucial back-to-back offensive fouls on Marcus Smart, says Smart was holding him, which led to him forcing himself away from Smart which led to turnovers. One of them opened a window for the Celtics to grab their first lead of the night, the second turnover gave the Celtics an opportunity to seal the win with two seconds left.


"First of all, how do you only have two officials on a national TV game?" Harden asked. "That is the first question. A lot of grabbing, a lot of holding. How else am I supposed to get open? A guy has two arms around my whole body. "

Brad Stevens turned to Al Horford in the final seconds, and he delivered the first go-ahead shot of the evening, which completed a 26-point comeback by the Celtics.

Kyrie Irving, who was very surprised to see only two officials near center court, reminded his teammates that they would have some wiggle room with what they can get away with throughout the fourth quarter.


"When I saw both (the officials) out there at the halfcourt I was like 'There's just two of ya'll tonight?, Irving said. "They were like 'It's just two. Somebody's hurt. I was like, 'So where's the backup?' I asked a legit question. I was like, 'Where's the back up?' Because I thought usually they have four refs, so there's one for backup or someone is watching in the back or something. I don't know the dynamic. But once the ref was hurt I was like, 'Both of you guys are gonna do this?' I was like alright well we're adjusting. I told my teammates that we only have two refs out here, so use that to your advantage."

Irving then echoed a similar view that Harden made about how irresponsible it was for the NBA to only have two referees calling the game.


"I mean, we're 10 athletes on the floor at one time," Irving added. "A lot of space, I mean, it's going to make a difference. That's why we have three refs. Both teams had to play within that realm and at times it went in their favor. At times it went in our favor. And the best way to combat that is just to adjust and I think both teams did a great job of that. Obviously, both teams wished some calls could have gone either way. But it did make a difference having just two refs."

Harden did give credit to the Celtics (just not to Marcus Smart) for great of team they are, however, mentioned the officials one last time towards the end of his talk with the media following Thursday night's game.


"They are a good team (Celtics)," Harden said. "They are going to make shots, they're going to make runs, especially because they are at home. We just didn't execute when we needed to, but like I said in that first statement -- it's tough. You can have two officials in a professional game. There was a lot of no-calls that needed to be called  because it changed the dynamic of the game. You got fast-break points, no-calls, turnovers or whatever the case may be. This is a professional game on national TV. It can't happen."