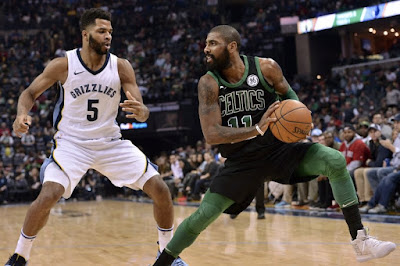 After the persistent Grizzlies wouldn't give up, the Celtics reached deep in the fourth quarter and closed the door on their opponent for good as Boston bounced back from their Friday night loss against the Jazz.

If Boston's 31-21 lead at the end of the first quarter gave you the feeling that this was going to be a rout the rest of the way, you were sadly mistaken. It was a back and forth contest between at Memphis, the Celtics had a 21-point lead at one point but the Grizzlies kept coming back over and over again.

After pulling to within five shortly before halftime, the Grizzlies knotted things up in the third quarter three times. When the Celtics would build a small lead, Marc Gasol and Tyreke Evans would pull Memphis back in before Boston put together a big run that led to a 102-93 victory.

The last time the Grizzlies tied the game came early in the fourth quarter (73-73) before the Celtics went on a game-defining 14-0 run. Jayson Tatum led the charge while Terry Rozier and Daniel Theis chipped in. Six Celtics finished in double figures, including Kyrie Irving's team-high 20 points, Tatum's 19 points to go with his 7 rebounds and a pair of steals and blocks.

The closest the Grizzlies came to tying the game again was when Mario Chalmers hit a 3-pointer with 2:19 left in the fourth that cut their deficit to six points (97-91). From there, Irving, Tatum and Horford led an 11-2 run to close out the game.

Boston's rough stretch continues with another trip, this time it's to Indiana to take on the Pacers Monday night.

The Celtics withstood the Grizzlies erasing a 21-point deficit behind a well-balanced attack and the Irving-Horford duo that really got going late in the fourth quarter after the Grizzlies pulled to within six. Celtics shot 48.8 percent from the floor.