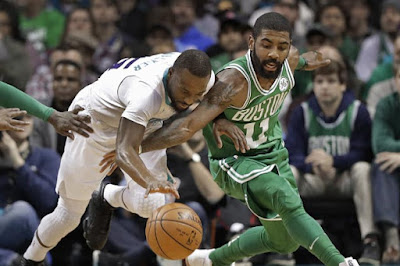 When the Hornets came within one point of erasing a 20-point deficit, the Celtics remained poised and determined to protect their advantage against the Hornets and sustained their intensity without letting up.

The Celtics never trailed the Hornets once throughout the night as they bounced back from their Christmas Day loss to the Wizards in a 102-91 win at Charlotte. Kyrie Irving led the Celtics with a team-high 21 points but it was Jayson Tatum's big fourth quarter that stood out the most in the second half with Irving spending most of the final frame watching from the bench.

Tatum netted 10 of his 18 points in the final frame, and was the difference in the Celtics' advantage in the fourth quarter -- where they outscored their opponent, 26-16. Al Horford chipped in a double-double (20 points, 11 rebounds) and Terry Rozier's 15 points and 4 assists led the second unit.

The Celtics caught fire from behind the arc -- where they drained 11 3-pointers in the first half -- first time in franchise history the Celtics have made that many from deep in the first half since 1997. The impressive shooting touch led to a 20-point lead -- their biggest of the night -- while the Celtics held the Hornets to 16 first-quarter points.

However, the Hornets returned from halftime with a chip on their shoulders and gave the Celtics a taste of their own medicine when they held Boston to 16 third-quarter points. Kemba Walker's nine points led a 31-point Hornets third quarter -- where the Hornets turned things around and took a 76-75 deficit into the fourth quarter.

Walker scored a game-high 24 points, Marvin Williams and Michael Gilchrist each finished with 13 points and Dwight Howard grabbed a game-high 17 rebounds to go with a dozen points.

Rozier's 3-pointer that was followed by Horford's 16-foot jumper kicked off a quick 7-2 run (81-75) after three quarters before Tatum did his best Irving impression in scoring the ball in variety of ways throughout the final frame. The rookie got himself to the free-throw line, was out and running on fast-break opportunities where he finished strong and helped build a double-digit cushion.

Facing a seven-point hole midway through the fourth, the Walker and Nicholas Batum converted on back-to-back field goals for the Hornets before Irving reentered the game at the 5:19 mark. Irving then drained a pair of field goals and Horford nailed a 3-pointer with 40 seconds left to push the lead back up to 12.

Celtics will take on the best offensive team in the league on Thursday when they welcome the Rockets to TD Garden.

The Celtics' efficiency from inside and outside of the arc certainly made a difference in protecting their lead throughout the night. Boston shot 47.4 percent from the floor, including 44.1 percent from deep on 15-of-34 attempts.

Jaylen Brown (knee) sat out Wednesday night after he tangled with Markieff Morris in Monday's game against the Wizards, it was a game-time decision and Stevens told reporters before facing the Hornets that Brown does feel better but wasn't healthy enough to play. Semi Ojeleye (back) was ruled out Wednesday morning, he's still nursing his injury from aggravating his back against the Bulls last Saturday night against the Bulls.