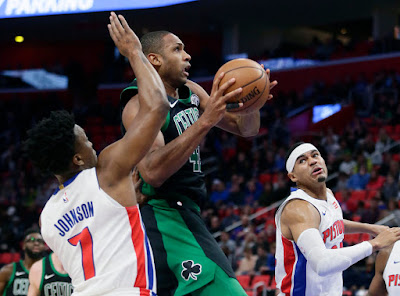 When the Pistons exited TD Garden with a 91-81 win over the Celtics on Nov. 27, it left a lasting impression on the rest of the Eastern Conference.

Detroit made a statement, beating a team with the best record in the league thus proving themselves to be a team that had earned its seat at the table alongside the rest of the upper-echelon contenders in the east.

The Celtics, however, played a different team on Sunday, one that didn't nearly have the same offensive firepower out of its trio -- Andre Drummond, Tobias Harris, Reggie Jackson -- that we saw in Boston two weeks ago. Meanwhile, the Celtics put together a well-balanced attack through five players scoring in double-figures and held off Detroit in the fourth quarter on their way to a 91-81 win at the Motor City.

Hard to envision the Pistons' three best scorers from two weeks prior duplicating their combined 77 points against one of the better defensive teams in the Celtics, but watching Jackson (0-for-9) and Drummond go a combined 1-for-14 from the floor couldn't have been something coach Stan Van Gundy had in mind. Harris scored a game-high 19 points but finished 5-of-15 from the field and Avery Bradley cooled off after hitting 2-of-2 for five points in the opening three minutes -- he only scored 7 more points after that on 5-of-16 attempts.

Boston's back court did a tremendous job of making life tough for Jackson and when it came to handling the dirty work down low it was Aron Baynes who was the biggest contributing factor.

The former Piston disallowed Drummond to get to his spots throughout the game. Although Drummond did what he does best -- rebound -- Baynes grabbed his fair share as well, finishing with a team-high 13 rebounds.

As for the offense, Al Horford found his groove early and often. Before scaring Celtics fans in Boston when he headed back to the locker room after banging knees Anthony Tolliver, he was a perfect 4-for-4 in the opening minutes of the game.

Horford returned shortly afterwards and went back to work on Detroit's front court, particularly Harris who was assigned to Horford and failed miserably to keep the veteran in front of him. Then came Tolliver, who led the bench with 15 points but couldn't do much in slowing Horford down.

He finished with 18 points, 9 rebounds and 6 assists and was key for the Celtics as they nearly grabbed a 20-point lead in the second half. Horford's biggest shot of the night came in the fourth quarter when he helped the Celtics end a horrendous seven-minute drought where Boston didn't make a single field-goal.

With under three minutes left, he hit a 3-pointer that pushed Boston's lead to seven after the Pistons pulled to within four (81-77) -- the closest they came to completing their comeback.

Detroit's 14-4 run in the final frame would have been the story of the game if it wasn't for Horford and Jayson Tatum's 3-pointers that kept the Pistons at bay. Kyrie Irving finished with 16 points through three quarters, he spent much of the fourth quarter setting up his teammates and Tatum added 11.

Jaylen Brown and Marcus Smart each scored a dozen as the Celtics held on after grabbing an 18-point lead in the third quarter. Celtics will round out their three-game road trip at Chicago on Monday against the Bulls.

Sunday marked the beginning of the toughest stretch of games that the Celtics will see all season -- 12 games in 18 days. Before the game, Brad Stevens talked about how he's been monitoring his starters' minutes all season to prepare for this specific brutal stretch of the regular season schedule. Irving and Horford led the team in minutes on Sunday, clocking in just under 34 before the Celtics head to Chicago for the second-leg of their road back-to-back.