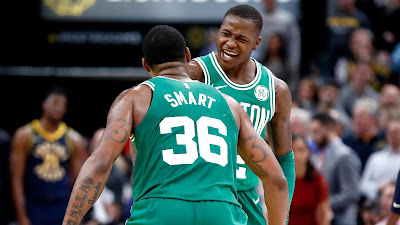 Terry Rozier delivered an inconceivable dramatic ending to Boston's 112-111 win over the Pacers Monday night -- adding another example to the 'never count them out' mantra the Celtics have demonstrated this season.

With 4.3 seconds remaining, Bojan Bogdanavic threw a high-pass intended for Victor Oladipo at midcourt, as Rozier intercepted it and ran down an open lane for the game-winning dunk, leaving a mere 1.5 seconds on the clock and a stunned Bankers Life Fieldhouse crowd.


"Kyrie (Irving) and Marcus (Smart) had the first trap and Marcus was trying to yell to the referee, `I'm fouling, I'm fouling!' but they didn't call it. Then they threw the ball to Bogdanovic and he made the pass and I was able to get my hand on it," Rozier said. "As soon as I stole the ball I took a look at the clock and saw there were four seconds and I knew I had time."

Kyrie Irving led the way with 30 points and 4 assists, while Jayson Tatum added 16 points, 5 rebounds and 4 assists. Marcus Smart finished with 15 points [4-4 from 3], 5 assists and 4 rebounds, off the bench, as Al Horford chipped in 14 points, 10 rebounds and one assist (9) shy of a triple-double for the Celtics, who are now 26-7 on the year.

Boston opened up with 12-0 lead in the first quarter and led by as many as 18 points before heading into halftime with a 62-47 advantage.

Indiana would cut the deficit to single digits late in the third period and had all the momentum in their favor to start the final frame.

It took a pair of 3-pointers by Irving on the final 30 seconds to keep the Celtics alive after being down 107-102, before Rozier's heroics, that still gave the Pacers a final half-court shot that hit the back of the rim before the final buzzer.


"That was one hell of a game to be a part of," Irving said afterwards.

The Pacers are now 17-14 on the season, as they try to stay in the top half of the Eastern Conferance standings

The Celtics heads back home to the TD Garden to take on the Miami Heat on Wednesday night.

Boston has won five-straight against the Pacers, including four in a row in Indiana. The Celtics' 38 first quarter points are the most in a period that they've scored this season.