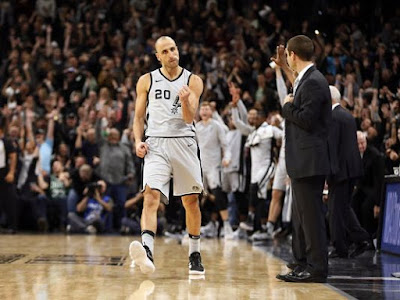 In a thriller at San Antonio, the savvy veterans prevailed over the young up-and-coming leaders of the Eastern Conference.

The Spurs reminded the Celtics Friday night why they've been an NBA powerhouse for over a decade.

Tony Parker was efficient in his offensive play and Pau Gasol put together a modest double-double (14 points, 11 rebounds) but it was Manu Ginobili's step-back 3-pointer over Al Horford that pushed the Spurs to victory, wielding San Antonio to avenge their loss to the Celtics from earlier in the season.

With five seconds left on the game clock, the Celtics turned to the same guy who took the previous three consecutive shots from behind arc for the them -- Kyrie Irving -- who faked out LaMarcus Aldridge before seeing his attempt rattle against the rim and fall out of the hoop.

Aldridge's double-double (27 points, 10 rebounds) led the Spurs, he was a force down low against Horford as the Celtics big man struggled in trying to slow him down. Rudy Gay finished with 15 points, 8 rebounds while Parker and Ginobili each scored 11.

Aside from his three straight misses from deep down the stretch, Irving was masterful. His 17 points in the opening 8 minutes set the tone for the Celtics before finishing with a game-high 36 points on 13-of-21 attempts.

And he wasn't the only one feeling it. For the third straight game, Jayson Tatum reached 17 or more points, he shined against the Spurs -- scoring 20 points to go with his 8 rebounds and a pair of steals. Riding on Irving's hot start, the Celtics grabbed a 12-point lead before the Spurs came roaring back.

Although Irving impressively outscored San Antonio, 17-16 at one point, the Spurs wasted no time in evening the score and then pulled ahead off of a buzzer-beating 3-pointer from Ginobili before heading into halftime. The Celtics put together a 15-3 run to end the third quarter -- setting the stage for a competitive back-and-forth contest throughout the final frame.

It all came down to a big shot from a guy who's knocked down dozens of them throughout his illustrious career after the Celtics surrendered an offensive rebound. Irving's shot was inches away from tying the game in the final seconds but he came up short.

The Celtics will make their second stop of the trip in Detroit on Sunday for another competitive duel against Andre Drummond, Avery Bradley and the Pistons.

Although both teams got sloppy in the fourth quarter, the Celtics and Spurs finished with nearly the same amount of turnovers (BOS: 14, SA: 13). San Antonio finished a plus-7 on the boards (46-39) while the Celtics chucked up 38 3-pointers and only nailed 11 of them. Irving was responsible for making 6-of-10 and Tatum was 2-of-4.