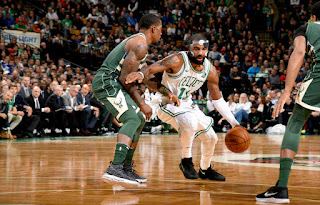 When Kyrie Irving took the floor in the second half, he looked like a man on a mission to put the Bucks away earlier than anyone expected.

After the Celtics took a 13-point lead into the third quarter, Irving scored 7 of the Celtics' first 13 points to push the lead to 15 (75-60) before Giannis Antetokounmpo spoiled his plans. He put the Bucks on his back, scoring 16 third-quarter points and led a run that sliced Boston's lead to nine (81-72) with 3:23 left.

The two All-Stars duked it out in the third quarter. Irving poured in 14 points in the frame, two points shy of Antetokounmpo's 16 third-quarter points and the Celtics took an 88-81 lead into the final frame.

Bucks head coach Jason Kidd decided to ride the hot hand and kept Antetokounmpo in the game to start the fourth quarter, leaving him in for the first 18 minutes of the second half before eventually subbing him out. Stevens wasted no time in putting Irving back in but Milwaukee hung around, clinging onto an eight-point deficit (102-94) with 2:55 left.

However, Irving wasn't done. He used the final three minutes to score five consecutive points for the Celtics, including a dagger 3-pointer that put Boston ahead by 12 points with 44 ticks left on the game clock.

The Celtics topped the Bucks, 111-100 and improved to 21-4 on the season. Irving finished with 32 points, Al Horford flirted with a tripe-double (20 points, 9 rebounds, 8 assists) and Tatum finished with 17 points and 6 rebounds.

The rookie demonstrated why he's the best 3-point shooter in the league when he went a perfect 4-for-4 from deep in the first quarter. Offensively, it was the Celtics' strongest first-half of the season en route to 64 points at the half.


"I thought our first half was about as good as we've played offensively all year," Stevens said after the game. "We've been building towards that the last couple of weeks, with better offensive play. But the way we were moving it, the purpose, to get it out of the pick-and-roll quickly because of the way that they were blitzing us and then skipping the ball and finding the right guys was good."

Antetokounmpo was unstoppable. He drove passed every defender Brad Stevens threw at him and made countless trips to the free-throw line -- where he drained 12-of-14.

The Greek Freak scored a game-high 40 points to go with his 9 rebounds. Khris Middleton chipped in 19 points and 8 rebounds and newly acquired guard Eric Bledsoe added 18 points on 6-of-9.

Celtics will close out their five-game homestand on Wednesday when they welcome Dirk Nowitzki and the Mavericks at TD Garden.