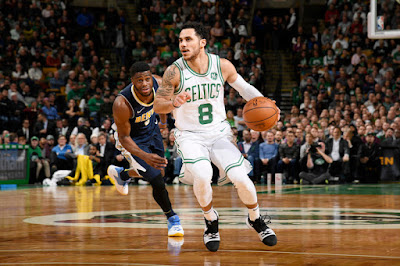 If the Celtics are going to finish their toughest stretch of the season -- 12 games in 18 days -- with a stellar record, it's going to take more than Kyrie Irving scoring over 30 points a night.

Heading into Wednesday night's game, the Celtics were already off to an iffy start. They kicked things off by defeating the Pistons by a significant margin but caught a beating by the hands of the lowly Bulls the following night.

With Marcus Morris (left knee soreness) and Al Horford (right knee contusion) out, Brad Stevens needed reinforcements on offense at home against the Nuggets and that's exactly what he got. But it wasn't from Marcus Smart, nor was it Terry Rozier or rookie Semi Ojeleye, who clocked in over 28 scoreless minutes.

Instead it was big man Aron Baynes and third-string guard Shane Larkin who delivered -- providing just enough scoring to push the Celtics ahead, thus, setting the stage for Irving, Jaylen Brown (26 points) and Jayson Tatum, who bounced back from his four-point dud in Chicago. Baynes and Larkin combined for 31 points on an impressive 14-of-17 efficiency.

Boston cruised to another victory at home where they're now 13-2, by beating the Nuggets, 124-118. Gary Harris put on a show from start to finish -- he had a game-high 36 points and Jamal Murray's 28 points and 10 rebounds went a long way in keeping the in reach until the Celtics pushed back down the stretch but guys like Irving and Baynes certainly set the tone for Boston in the first half.

The Celtics haven't had a big man like Baynes in a long time. He's an old school type of center -- one that bangs down low, does the dirty work, pulls down boards and adds a few made baskets when you need him to.

But without Horford, Stevens needed just a little more offense out of the big fella and Baynes didn't disappoint. And when Larkin checked in from off the bench in the second quarter, he went straight to work.

Larkin was perfect, 4-of-4 from the floor, including a trey from deep in seven second-quarter minutes. And he remained perfect, hitting all six of his attempts on the night to go with his three rebounds and a pair of steals.

Behind Irving's team-high 15 points, Baynes' 13-point first half led the Celtics but it was Larkin's nine points in the second quarter that was literally the difference at the half as Boston took a, 68-59, lead into halftime.

Boston turned in their best scoring second quarter of the season, outscoring the Nuggets, 38-28, and finished 15-of-22. They also finished the game shooting nearly 60 percent (59.5) from the floor, Celtics converted 47 field goals off of 29 assists.

Larkin's defensive pressure carried over in the second half, as he pressured Denver's back court and kept Boston's lead afloat before heading into the final frame.


"He's been great," Stevens said to reporters after the game. "And I thought Smart, first of all, was really good in that first part of that third quarter defensively. I felt like he was all over the place but I felt like Shane's pressure kind of turned the game for us. You know, he made it a little bit tougher to get into their stuff. Every action happened a little higher because he was pressuring the ball, and then he obviously played great offensively. Made big shots; the timely three that he hit when they had cut [the deficit] to three was huge. But he's done that, he's been really consistent all year with the spark he's given us."

And that's when Irving stepped in by doing what closers typically do in this league -- use his team's lead to his advantage and close out their opponent. He poured in nine fourth-quarter points, topping off an 18-point second half of his team-high 33 points.

The Celtics will host Utah Friday night, where they'll look to carry their momentum against Rudy Gobert and the Jazz.

Larkin along with Daniel Theis both finished with a game-high plus-14 rating. They led the second unit with a combined 22 of the 29 total bench points.