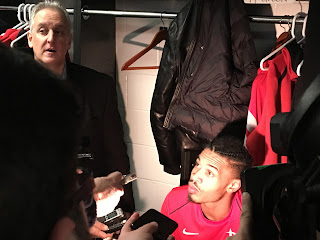 When Gerald Green got the call Thursday morning that a one-year deal with the Rockets was finalized, he packed his things and headed to a familiar city to join his new squad.

Green was told Wednesday night that there was a good chance he was going to be signed by Houston -- a club riddled with injuries to its starting lineup -- so he stood by Thursday ready for confirmation that he was in fact signed by the Rockets and heading to Boston.


"Crazy, right? Out of all places," Green said moments before Thursday night's tip-off.

The veteran forward, who was only 18-years-old at the time, not only started off his NBA career with the Celtics back in 2006 but was a member of last year's team that impressively finished its season in in the Eastern Conference Finals when the Celtics were bounced out by the hands of the Cavaliers last May. Green had a hand in Boston's deep playoff run when Brad Stevens started him in Game 3 and 4 against the Bulls, when the Celtics were facing a 2-0 hole.

Green helped knot up the series at two game apiece when he scored 18 points and grabbed 7 rebounds in Game 4. He reflected on his time with the Celtics last season.


"Things ended good in Boston," Green explained. "Obviously they made a lot of changes to the roster this year and it was for the better. They're the number one team in the Eastern Conference -- they're doing well. Things for me in Boston did not end bad, it just is what it is."

Green not only made it clear that there was never any bad blood between him and the organization that drafted him as a teen, but also went as far as complimenting Danny Ainge for his off-season moves and putting the Celtics in a position to compete.


"I was, but Danny Ainge is a genius," Green said. "He knows what he's doing, every year he makes changes that nobody knows and for some reason they're always successful next year."