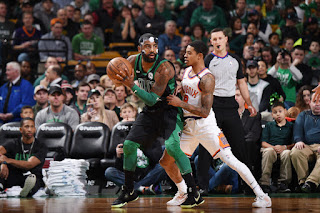 Brad Stevens may have found his go-to starting lineup.

The Celtics head coach has been adamant on the fact that he hasn't decided on a fixed starting-5 for the regular season.

Throughout the season's first 25 games, Stevens has made tweaks to the his front court, swapping big men Aron Baynes and Marcus Morris for each other on a night-to-night basis while the rest of the members of the starting lineup -- Kyrie Irving, Jaylen Brown, Al Horford, Jayson Tatum -- remain intact, when healthy.

The Celtics are at their best offensively when Baynes starts. Morris has found a role as the second unit's most consistent scorer, and he's someone the Celtics can rely on.

He chipped in 17 points for the second consecutive night on 6-of-14 shots to go with his 8 rebounds. And much like he did Thursday night against the Sixers, he led a significant Celtics run that ultimately changed the complexity of the game.

After falling behind by five points in the third quarter, the Celtics eventually put together a 17-2 run that bled into the final frame and Morris was responsible for 10 of those 17 points. Then came the rest of the fourth quarter -- where Irving did his thing, scoring six points in four minutes and led the Celtics to their fourth win in five tries.

He scored a team-high 19 points. Jaylen Brown bounced back from his funk (17 points) and Al Horford finished with a double-double (14 points, 11 assists).

Devin Booker didn't come close to duplicating his historic career-high 70-point night from the last time he played at TD Garden but he did score more than half. His 38 points pulled the Suns to within three when he drained one from deep with 18.2 seconds left. Booker then used his sixth and final foul on Irving, who sunk in a pair of free-throws to seal the win.

While Morris is capable of scoring in bunches, Baynes provides the kind of toughness the Celtics need to help create stops in the paint and finished with a game's best plus-16 player rating. If Boston can get into the habit of getting off to quicker starts,  Stevens would have the luxury of resting his starters in the fourth quarter -- something he considers a priority for him and his coaching staff.

The Celtics shot over 50 percent (50.6) for the second straight game, something they struggled with throughout their start to the season.

So, does Morris' recent play influence Stevens to stick with Baynes to start?


"[It] doesn't really," Stevens said after the game. "Starting or when they play doesn't really matter. So, he's still going to start when we feel like the matchup is right. And the good news is that you're not as quick to pull him because of the minutes restriction as it's been lifted or increased. You know, having 20-30 [minutes] is much different than 20-22 when you're trying to manage a four-quarter game.

"I mean there are some teams you just can't start big against and some teams that it's hard to start small against. So it's good that everybody is able to play well through that."

We'll have to wait and see which lineup Stevens chooses on Monday when they welcome Giannis Antetokounmpo and the Milwaukee Bucks at TD Garden.

Celtics limited themselves to only 9 turnovers while finishing with 8 steals. The defense had its lapses but when the offense took over in the second half it was enough to push Boston ahead of the Suns.