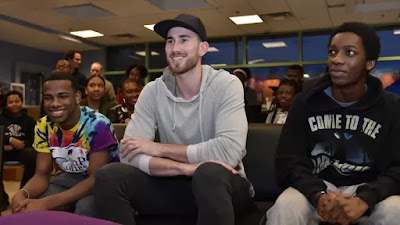 Gordon Hayward took another step in his recovery process on Wednesday, as the Celtics swingman was seen without his walking boot, less than two months removed from suffering a fractured left tibia and dislocated ankle against the Cavaliers back on Oct. 17.

Hayward was all smiles during his appearance at a local Boys and Girls Club in the Roxbury neighborhood of Boston, where he was seen walking without any assistance or the use of crutches.

The All-Star, who was wearing nothing more than an ankle brace, had just came from a doctor's appointment, where he got the 'OK' to say goodbye to his walking boot, hopefully "for good," if all goes according to plan during the rehabilitation of his left ankle.


"The process is always fluid and can change at any time, but, for me, today was the day where I walk around without the boot at all," Hayward said before giving a motivational speech during his community event to a group of teens and playing the video game Destiny 2 with them. "And so, I'm going to try to move forward without the boot. Depending on how my foot reacts, how much activity I'm able to do on it without it being sore, I could move back into the boot or I could never look back and never see the boot again.

"I'm just taking it day by day; today has been awesome so far without the boot." [ESPN Boston]


Over the last few weeks, photos and videos of Hayward shooting a basketball from a chair and even taking shots while standing in his walking boot, have gone viral, which begs the question, what's the possibility of a return this season for the Celtics forward?

For Hayward, all the mini-milestones have put his mind at ease as he focuses on daily goals.


"I think I'm a goal-oriented type of person. So I set my sights on a [short-term] goal and just focus on that until that goal is completed," Hayward said. "I have a great group of people around me; the Celtics' staff has been phenomenal, accommodating to everything that I need. My trainer [Jason Smeathers] is here, my wife [Robyn] at home, everybody is keeping me motivated and making sure that I'm sticking with protocol. It's definitely like a team thing for me. I have a lot of people that are helping me. That makes it easier." [ESPN Boston]

In an interview with the Adam Himmelsbach earlier this week, Hayward spoke about a potential comeback this season and believing he could return sooner than expected.


"It's definitely in the back of my mind," Hayward said. "I'm definitely pushing to get back as fast as I can, while making sure that I still have a lot of good years of basketball in me. And coming back early and hurting something else is not part of that plan. So I'm making sure that if I come back, I'm 1,000 percent confident in myself and my leg. I hope more than anything I can play this season. That would be awesome. But that's not something I'm stressing about. I'm stressing about what I can do today to help myself get better." [Boston Globe]

The Celtics have reiterated that they don't anticipate Hayward to return for the 2017-18 campaign, despite the clear optimism from their summer's coveted free agent acquisition. However, coach Brad Stevens has said neither he or the team will put any limitations on Hayward, especially when it comes to his shooting drills and daily treatments.


"I think it really helps with the routine. It gives me something to track, to look at and says, 'OK, this is my schedule for the week, this is what I'm going to do each day,'" Hayward said. "It allows me to kinda keep moving forward. That's been good." [ESPN Boston]

The Celtics have hung Hayward's No. 20 jersey in the locker room as a reminder before games that their teammate is still very much a part of the team.

Hayward, who was seen courtside during the Celtics home win over the Warriors, hopes to join the team more often as he continues to heal from ankle surgery.

As the Celtics prepare for Friday night's matchup against the Utah Jazz, Hayward wishes he could face his former team in front of the TD Garden crowd.


"I think I’m going to be able to hang out with them a little bit, catch up," said Hayward. "I know they’re going to bring everything they have. This is a game that they circled on the calendar for sure. I definitely wish that I was playing but it’s going to be a fun game to watch." [ESPN Boston]

While Hayward said it will be "weird" watching the Jazz take on his new team, he did have one last gem of a message for his Celtics teammates: