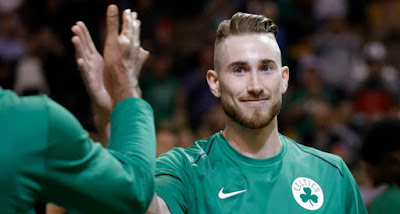 While swingman Gordon Hayward says he feels optimistic about returning to the Celtics this season, head coach Brad Stevens perceives that notion as wishful thinking.

In a recent interview with Boston Globe's Adam Himmelsbach, Hayward shared his thoughts on a potential comeback and says that he's truly confident that he can heel sooner than expected.


"It's definitely in the back of my mind," Hayward said. "I'm definitely pushing to get back as fast as I can, while making sure that I still have a lot of good years of basketball in me. And coming back early and hurting something else is not part of that plan. So I'm making sure that if I come back, I'm 1,000 percent confident in myself and my leg. I hope more than anything I can play this season. That would be awesome. But that's not something I'm stressing about. I'm stressing about what I can do today to help myself get better." [Boston Globe]

Before facing the Pistons Sunday afternoon, Brad Stevens was asked about Hayward's optimism and Stevens -- like he's been saying over and over again all season -- stated that he's not planning on seeing Hayward back in uniform this year and neither is the organization.


"He's gotta find any motivation that he can find," Stevens said. "We're certainly not going to put limitations on what he strives to do. That being said, we're not planning on it. All that is really good, it indicates he feels really good where he's headed and he should, and that he's going to be fully healthy when he does get back on the court -- which he should. That's the positive of it."

Hayward, who suffered a left ankle dislocation-fracture less than five minutes into the regular season, is currently out of his walking boot on the road to recovery. The Celtics were granted a disabled player exception worth $8.4 million and could use it before the playoffs if an opportunity presents it's self that they see fit.

If the Celtics were to use the exception at some point this season, it would not affect a potential Hayward comeback.