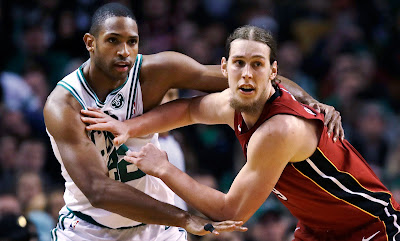 Before the Celtics hosted the Miami Heat on Wednesday night, the last memory that basketball fans in Boston had of Kelly Olynyk, was his impressive 26-point (career-high) performance off the bench, in a Game 7 clinching win at the TD Garden over the Washington Wizards in the second-round of the playoffs last spring.

Nearly seven months later and a four-year/$50 million contract to play in South Beach, Olynyk clearly had some reserved feelings about the team that let him walk in free agency after dropping a new career-high 32 points in a 90-89 Heat win over the Celtics.

In his first trip to Boston since signing in Miami, Olynyk had an eventful 24-hours seeing familiar faces before facing his former team


"It's home," he said. "Spending four years here after college, I have a house here. Just coming back and seeing friends, family, everybody. It's hard. You're here for like 24 hours, and you're trying to squeeze everybody in and see everybody. It's tough.

"But just walking through the streets and the receptions you get the character of this city. It's a pretty special place."

Olynyk went 12-of-15 from the field in front a loud Garden crowd, including going 6-of-8 from behind the arc and thunderous dunk, that reminded fans that 'the bounce is still real.'

But it was after his sixth 3-pointer of the night when Olynyk's contained emotions finally spilled over, leading to some chirping and looks towards Celtics bench late in the fourth quarter.


"I blacked out. I don't remember," Olynyk said when asked about his trash talk. "I was just really emotional.

"I mean, it definitely felt kind of like a playoff game, a playoff atmosphere, for sure. That's the way Boston's crowd and fans are. They're crazy about it. But it was an emotional night, a fun night, and I'm glad we came away with a win."

That's two huge victories for Olynyk over the Celtics, as Miami has won it's regular season series over the Celtics 2-1. The Heat were also responsible for snapping Boston's 16-game win streak a month ago.

The Celtics also honored Olynyk as the night's "Heroes among us" recipient, for the over 100 community events he was a part of in the last four-years, while helping raising thousands of dollars for the team's Shamrock Foundation. A video tribute was shown at the start of the second quarter, as fans gave the C's former center a standing ovation.

"They literally save people's lives, dive in a frozen lake and rip out two kids who were playing around on a pond. So I don't know how what I did stacks up to that," Olynyk said of the typical Heroes Among Us recipients. "But it's just an honor to be a part of it. I think there's a lot of people in there who did numerous literally un-human things. I remember we would stand on the bench, and when it happens [during a] timeout you're looking up there, and it would be like, yeah, they literally ran in an abandoned building and saved, like, a group of kids or something. Or they did something and raised $2.5 million in a day for something.

"And you're like, first of all, how did they do this? Second of all, if you're running by this building, are you really running in this building? And you're like, 'These people are phenomenal human beings.' And I don't know what to say. It's almost like you're just almost starstruck when you see these people and the feats that they've accomplished. So to be listed in a group like that, it's amazing."

Wednesday night was the second time in the last week that a former Celtic came through the Garden to make a statement in a win since Jonas Jerebko and the Jazz ran through the C's in a victory, not to mention a home loss to Avery Bradley and the Pistons over a month ago as well.


"By this point, we shouldn't be surprised. It's just the competitive nature in every last one of us," Marcus Smart said after the Celtics loss. "You leave a team, and you want to prove to that team that you should still be there. ... Kelly kicked our ass. Jonas kicked our ass. We let those guys do that. If this isn't a wakeup call, I don't know what is."

The good news is, barring any playoff matchups, the Celtics are not going to face Kelly Olynyk or the Heat again this season.