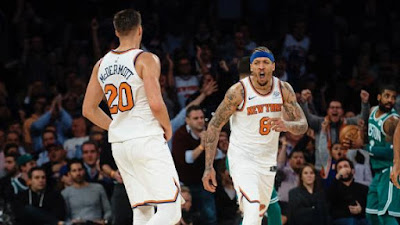 No Jaylen Brown, no Marcus Morris, and virtually no Kristaps Porzingis?

Less than 24 hours removed from Kelly Olynyk's erratic performance  -- where he led the Heat to an upset victory at TD Garden -- Michael Beasley got his Thursday night in a 102-93 Knicks win as the Celtics laid an egg at New York. Beasley's 32 points on 13-of-20 attempts stole the focus from Porzingis and led the way for the Knicks while they built a 14-point cushion and kept their opponent at bay.

Kyrie Irving contributed his own 32 points -- which marked the fifth time he's scored over 30 points throughout his previous six outings -- but was the only contributing factor aside from Jayson Tatum (17 points). Porzingis struggled immensely (0-of-11), he was one made free-throw away from turning in a goose egg in the scoring column next to his five rebounds but the Knicks were fine without him.

Knicks coach Jeff Hornacek left his franchise player on the bench throughout the fourth quarter because his team was rolling in the final frame -- where they outscored the Celtics by nine points. Boston hung around after halftime and then played catch-up for most of the second half because of Beasley's 28 points in the final quarters -- which made all the difference.

He hit jumper after jumper in the fourth quarter and after rookie Frank Ntilikina and Doug McDermott hit two back-to-back from downtown to push their lead to 11 points with 2:19 left, that's when New York smelled blood. Boston managed to cut their deficit to six points with 40 seconds left but that's the closest they came to tying the game.

Enes Kanter finished with a double-double (14 points, 10 rebounds), while Courtney Lee and Jarrett Jack each scored a dozen.

With the loss, the Celtics (26-9) are now tied with the Cavaliers (24-9) in the loss column while the Raptors (22-8) -- currently on a five-game winning streak -- have the fewest losses in the Eastern Conference.

Boston is approaching the tail-end of their gruesome stretch (12 games in 18 days) as they will head home for two home games in three days, starting with the Bulls (just had their seven-game winning streak snapped against the Cavaliers on Thursday) on Saturday before taking on the Wizards on Christmas Day.

Beasley's 32 led a combined 56 bench points for the Knicks while the Celtics' offense struggled for the second consecutive night. New York shot 45 percent from the floor and Boston couldn't find its rhythm as guys like Al Horford (10 points) and Marcus Smart (10 points) were inconsistent.

Smart got the nod in the starting lineup for Brown (Achilles), who was a late scratch after he felt soreness prior to shoot around.