Wizards 111 - Celtics 103: John Wall, Bradley Beal, Wiz could be a problem for Boston 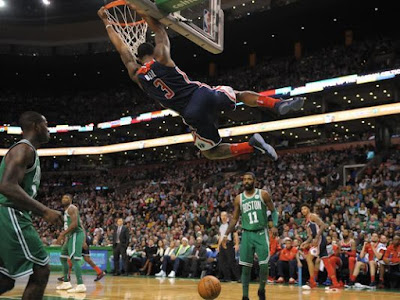 It wasn't long ago when the Wizards loss Game 7 at TD Garden in the Eastern Conference semifinals.

The last time the Celtics saw the Wizards it was an epic Game 7 Eastern Conference semifinals showdown. And while this edition of the C's the Wizards faced on Christmas Day has drastically changed since then, the intensity displayed by both clubs sure seemed familiar.

The big difference this time around? The end result.

In what was a competitive game between the two teams, the Wizards used a 12-0 fourth-quarter run to put the Celtics away. John Wall and Bradley Beal combined for 17 points in the final frame as Washington cruised to a 111-103 win at TD Garden.

Wall and Beal made a statement on Monday as they showed just how tough the Wizards can be when they are on their game. The dynamic back court duo led the Wizards with a combined 46 points, Wall netted 21 points to go with his 14 assists and Kelly Oubre finished with 16.

After the Wizards kicked off the second half with a 10-2 run, the Celtics rallied back late in the third quarter before Rozier's corner 3-pointer at the end of the frame pulled Boston to within four points (80-76). In what was a back-and-forth contest, the Celtics managed to create some separation before the Wizards went on their game-defining run.

Jayson Tatum found his offense late in the fourth -- where he drained 9 of his 20 points and when Kyrie Irving (20 points) and Terry Rozier (16 points) drained back-to-back 3-pointers to pull the Celtics ahead by five points -- which was their largest lead of the night -- Boston couldn't hold on.

The Celtics couldn't string together stops throughout Washington's 12-0 run and fell short in trying to erase their late-game deficit.


"Obviously, [we] didn't play great offense; had a couple rim out but also had a couple of turnovers," Brad Stevens pointed out. "You know, I thought their best players were comfortable all night. I didn't feel like we were into [Bradley] Beal at the level we needed to be. I thought we were really lucky that he had kind of an off shooting night. And then obviously [John] Wall got downhill on us on a bunch of different matchups. And then probably most importantly, the wing rebounding on the offensive glass. I mean, those are killer possessions when you have a stop and you just can't finish that stop. You know, we turned and looked instead of [boxing] out most of the night, and it ended up costing us."

Rozier's 3-pointer pulled the Celtics to within five points with one minute left after the Celtics gave up two offensive rebounds on back-to-back possessions, the Wizards were able to close out the win at the free-throw line.

The Celtics will have a day to rest before heading to Charlotte to take on the Hornets on the first night of a back-to-back set.

The Celtics grabbed zero defensive rebounds in the final 6:56. Boston entered Monday's game as the tenth best rebounding team in the league but certainly didn't look like that team against the Wizards.