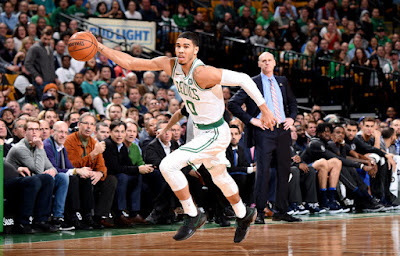 For the second time against the Mavericks this season, the Celtics put together another stellar fourth quarter and turned in a win.

It's starting to become a pattern.

With Jaylen Brown (eye) and Marcus Morris both out of the lineup (left knee), Brad Stevens cleared his bench -- which gave Shane Larkin an opportunity, and he took advantage of it. Larkin got it going from deep on 3-of-5 attempts and scored 11 points in 15 minutes.

Terry Rozier's 12 points led the second unit, he also pulled down 9 rebounds while Daniel Theis finished with a game-high 11 boards.

Dallas got off to a hot start in the first half before taking a 10-point lead into halftime. First-round rookie Dennis Smith Jr. scored all 12 of his points before the second half, where Dirk Nowitzki poured in 9 of his 16 points.

Harrison Barnes scored a team-high 19 points but lost his touch down the stretch. After a scoreless third quarter, Nowitzki added 7 points in the frame but it took him 7 attempts to get there, including 1-of-5 from behind the arc.

Meanwhile, Irving caught fire again towards the end of the game. The Celtics' closer checked back in near the midway mark of the fourth and tacked on 9 points, pushing Boston to another victory on its home floor.

The Celtics will hit the road for the next three contests that starts at San Antonio on Saturday and ends at Chicago on Monday.

Celtics out-rebounded the Mavericks, 53-45 and turned 9 offensive rebounds into 10 second-chance points. Brad Stevens also got a combined 36 points from his reserves, an impressive feat for a second unit that was playing without their best scorer in Morris -- who averages 12.6 points per game -- and Marcus Smart, who started alongside Irving in place of Brown.