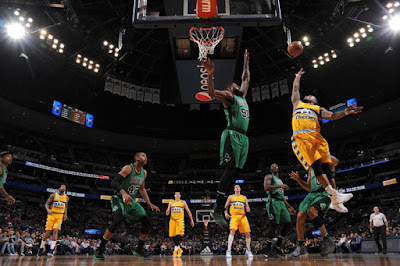 Boston looked to wrap-up their road trip on a positive note, but Denver had other plans as they trying to hold on to a playoff spot out West. It was Wilson Chandler and Nikola Jokic who lead the Nuggets to a 119-99 win over the Celtics at the Pepsi Center on Friday night.

The best rebounding team in the league made sure to win the battle of the glass 49-33 and limited the Celtics to 42.5 percent shooting from the field. Nikola Jokic finished with 21 points, 10 rebounds and 7 assists. Wilson Chandler had a game-high 23 points and 8 rebounds, while Danilo Gallinari added 20 points, 5 rebounds in the Nuggets 30th win.

Isaiah Thomas scored 21 points to go with 5 assists and Avery Bradley finished with 16 points on the night. Al Horford added 15 points, 5 rebounds and Jaylen Brown chipped in 14 points in 22 minutes off the bench. Marcus Smart contributed with 13 points and 7 rebounds for the Celtics, who are now 41-25.

Boston never lead once as the Nuggets led by as many as 20 points in the first half. The Celtics would cut the deficit 75-67 midway through the third quarter before Denver would go on a 11-4 run to make it 86-71 and that was the closet the C's would get the rest of the way.


"It was just one of those games," Isaiah Thomas said. "We just have to figure out how to be more consistent each and every night."

Thomas could not lead the Celtics to a fourth quarter comeback as he was held to just two points in the final frame.


"Isaiah Thomas is a four-quarter guy, he leads the NBA in fourth-quarter points, and Gary Harris did a great job on him," Wilson Chandler said.

A three-point play by Jaylen Brown got the Celtics within nine points late in the fourth before Denver extended their lead to 15 after back-to-back 3-pointers.


"We were slow to loose balls and we gave up a ton of rebounds," Celtics coach Brad Stevens said. "Those are the type of things that you have to do to get back in it or to stay in it from the get go."

The Celtics finished their road trip 2-3, after huge wins against the Lakers and Warriors. With 15-games left in the regular season, Boston returns to the TD Garden a half-game behind the Washington Wizards for the second best record in the East. They will take on the Chicago Bulls on Sunday afternoon in a national televised matinee, tipping-off at 3:30.

Celtics suffered the third worst lost of the season as the Nuggets scored 119 points. It was the most points the C's have allowed since a loss to the Wizards (123) back in January. Denver made 52.9 percent of their shot attempts despite turning the ball over 19 times.