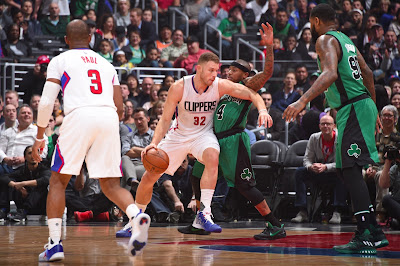 After suffering a heartbreaking loss to the Suns on Sunday, the Celtics looked to get back on track during their five-game West coast road-trip when they rolled into the Staples Center 24 hours later.

Boston looked poised to pick up a win until the last minute of the third quarter when the Clippers scored 11 unanswered points on their way to a 116-102 loss on Monday night.

When the Celtics led, 71-64 with 1:41 left in the third, it was Jamal Crawford, who finished with 19 points and 5 assists, that sparked an 11-0 spurt when he hit three 3-pointers to put the Clippers up for good (75-71). And Boston was left playing catch up the rest of night.


"It's hard to stop a guy, especially a guy like him," said Marcus Smart of Crawford. "He's known for that. He can get hot real quick. When he gets hot, gets going, it's going to be a long night for you."

Blake Griffin led the way for Los Angeles with 26 points and 8 rebounds, while Chris Paul added 23 points. DeAndre Jordan notched a double-double of 15 points and 12 rebounds for the Clippers, who are now 38-25.

Isaiah Thomas finished with a game-high 32 points to go along with 5 assists and 3 steals. Marcus Smart scored 21 points off the bench, Avery Bradley added 14 points for the Celtics, who were without Al Horford (elbow) for a second straight game, are now 40-24 on the season.

Boston, playing on a second night of a back-to-back, was down, 75-74, to begin the fourth quarter before the Clippers went on a 24-8 run to push the deficit 99-82, the largest of the night.


"I thought they outplayed us in the first half," said Clippers coach Doc Rivers. "They were more physical. And then I thought we turned that, and we became the more physical team in the second half."

The Celtics for most of the night shot in the mid-30's from the field but finished with 41 percent shooting, while the Clippers made 53.4 percent of their baskets. Los Angeles also outscored Boston, 75-54 in the second half (62 percent from the field in that span), including a 41-14 run.


"I don't think our shot selection has been great for a couple of games now, but I also think they really defended us well and took some things away," said Brad Stevens.

Jamal Crawford was the difference as Boston blew another double-digit lead, this time it was 13 points at the end of the third frame and were never able to recover, giving them their second straight loss.


"Obviously he made some tremendous shots, that's what he does," said Stevens afterwards. "And then we weren't scoring on the other end. So obviously they kind of flipped the script there at the end of the third. You know from watching the NBA, 13 is nothing when you've got a team like that."

Boston has now lost five of their last eight, and will take on the Golden State Warriors on Wednesday at Oracle Arena. Tip-off is at 10:30 PM on ESPN.

Former Celtics captain Paul Pierce faced his former team for the last time, the 19-year veteran did not play, due to the coach's decision, despite the Clippers running a tribute video in the middle of the first quarter. Pierce, who plans to retire at the end of the season, received a standing ovation. Many Celtics fans in attendance also chanted his name during the fourth quarter.