Celtics Pregame: Timberwolves will be Boston's toughest opponent of the week 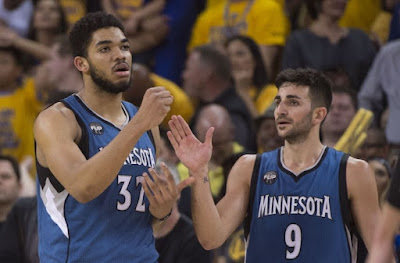 With 15 games remaining in the regular season, the Celtics have a legitimate chance of heading into the playoffs with the second-best record in the east behind a solidified rotation and a healthy roster.

Unlike some of the other elite teams in the league -- Cavaliers, Warriors, Spurs -- the Celtics' starting lineup is at full strength, something Boston is just now starting to get used to this season.

From players like Jae Crowder, who missed 10 games, Al Horford, who missed 14 to Avery Bradley, who missed 23 games this season, Brad Stevens has had to trot out a number of different lineups.

But when he does have his preferred starting-five, the Celtics have a very impressive winning percentage (.741). Boston is 20-7 in games that Crowder, Horford, Bradley, Amir Johnson and Isaiah Thomas start.

Before stomping all over the Bulls on Sunday, the Celtics took their own 20-point embarrassing loss to the Nuggets in their last game of a five-game road trip. However, with a relatively light schedule ahead of them the odds are certainly in their favor to finish strong and hold onto the second seed in the Eastern Conference.


"Being consistent; that's what we have to be," Isaiah Thomas said after Sunday's win over the Bulls. "If we're consistent and play like we know how to play, we'll take care of business with these last 15 games. If we're not, we'll be up and down like we've been the past couple of games. Everybody is realizing what's at stake and guys are locking in."

In a week where the Celtics will face the Nets and 76ers -- two of the three teams sitting in the basement of the conference -- the Timberwolves on Wednesday will certainly be the Celtics' toughest opponent. Next Monday's tilt against the Wizards is easily one of the biggest matchups left in the regular season but if this team want to stay ahead of Washington its going to have to defeat their weakest opponents.

Having Bradley back for the foreseeable future will definitely help. Averaging 14.7 points and shooting 42 percent in his last four games, the defensive guru is starting to regain his scoring rhythm after missing over 20 games in a row.

Meanwhile, the Celtics bench has found its identity. Anchored by Marcus Smart's grit on both ends of the floor, Kelly Olynyk's defensive effort and Jaylen Brown's newfound confidence, the second unit has found its niche.

In the last five games, Smart averaged 12.4 points and 1.2 steals, Brown averaged 10 points while knocking down 3-pointers and taking his opponent to the rim and Olynyk made defensive stops and averaged 5.4 rebounds.

Minnesota (28-38) enters TD Garden on Wednesday with a below .500 record but don't let that fool you. They're 7-3 in their last 10 outings and have beaten some of the best teams in the league.

The Timberwolves, who are riding high off a 119-104 lopsided win over the Wizards, will continue to turn to Karl-Anthony Towns for production in the post and have been reaping the benefits of Ricky Rubio's resurgence. Rubio averaged 17.4 points and 12.4 assists in his last five games, including a win over the Warriors last Friday.

Along with Andrew Wiggins, the Timberwolves rely heavily on all three of the aforementioned starters. Look for coach Tom Thibodeau to turn to Nemanja Bjelica off the bench for size and Shabazz Muhammad for wing scoring but the majority of the offense will come from the starting unit.