Celtics Pregame: Stevens on facing Giannis Antetokounmpo, 'Don't think I've ever seen anybody like him' 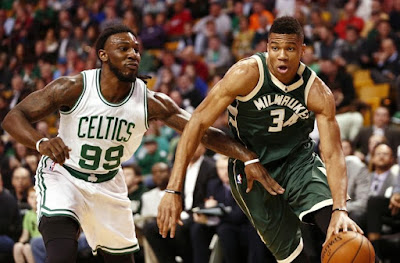 The Celtics will undoubtedly have their hands full on Wednesday as they gear up to face one of the hottest teams in the league.

Fresh off their 118-108 win at Charlotte, the Bucks will look to make it two in a row against the Celtics on the second night of a road back-to-back.

Celtics coach Brad Stevens couldn't say enough about Bucks forward Giannis Antetokounmpo -- who is probably the biggest reason why Milwaukee has gone from a lottery team to the fifth best team in the Eastern Conference.


"He does some things," Stevens said. "That's the best way to say it. He keeps adding to it. Him in transition is like, I don't think I've ever seen anybody like him."

The Greek Freak enters Wednesday's game averaging 23.1 points, 8.5 rebounds and 5.3 assists. Russell Westbrook and James Harden and the only other players averaging 20-plus points, 8-plus rebounds and 5-plus assists.


"As he's become more skilled," Stevens said. "He continues to put you in a worst bind. He's tough; he's good."

Milwaukee's supporting cast has also played a role in their success. The return of Khris Middleton (left hamstring) has helped throughout their recent stretch, rookie Malcom Brogdon (10.2 points) has emerged as a reliable outside threat and Greg Monroe is embracing his newfound 6th man role -- averaging 12 points, 6.7 rebounds.

Middleton has been on fire this month, averaging 16.8 points and shooting 46.5 percent from the floor, including 40.9 percent from behind the arc.


"Middleton spaces the floor, he can run off screens and score," Stevens said. "He's a really good scorer cutting off the ball. He's gotten better, I think, as time's gone on in pick-and-roll and with the ball. And then he's a knockdown shooter."