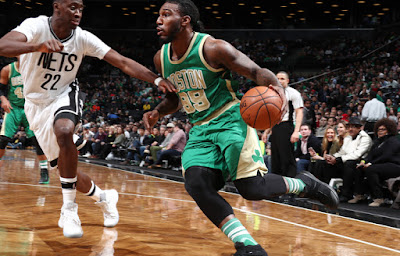 On Saint Patrick's Day, Isaiah Thomas was out with a knee injury and the Celtics needed someone to carry them at the Barclays Center. Turns out Jae Crowder was the lucky charm, as he led Boston to a 98-95 victory over the Nets on Friday night.

"A lot more shot opportunities," said Crowder, who scored 9 points in the fourth. "Just a lot of opportunities through our offense that we don't run for him. A lot of guys were getting a lot of looks that probably weren't used to getting."

Crowder finished with a game-high 24 points to go along with 12 rebounds (season-high) on the night. Avery Bradley addd 16 points and 5 rebounds while Al Horford chipped in 14 points and 8 rebounds. Marcus Smart, who started for Thomas, scored 12 points, dished out 5 assists and also had 3 steals. Gerald Green contributed with 11 points off the bench for the Celtics, who are now 44-25 on the season.

For the next ten minutes of play both teams would exchange leads until Crowder hit a 3-pointer on an assist from Horford to give the Celtics a 88-85 lead with 3:36 remaining.


"I mean, obviously, Isaiah does so much for us on the offensive end and tonight we had to find ways," Horford said afterwards. "I felt like Jae Crowder answered the call."

Crowder completed a three-point play to put Boston up 93-85, but the Nets refused to go away, sparking one more run (8-0) to pull within two (93-91) with 44 seconds to play. After a pair of made free-throws by Marcus Smart and a 12-foot jumper by Jeremy Lin with 16 seconds left, the Celtics were not yet out of the woods.

Smart once again nailed two free-throws after the Nets tried to pull the 'hack-a-Smart' card and Randy Foye hit a layup, only to have Avery Bradley hit the second of two free-throws to secure the C's win over Brooklyn.

It was Jae Crowder who was the man of the hour and kept the Celtics alive despite the Nets making it a ball-game in the fourth quarter.


"He's a tough matchup and he's so versatile," Nets coach Kenny Atkinson said of Crowder. "He's one of those guys in this league that's built like a four-man who can play the three and the four. The dunk and then the two 3-pointers I thought were killers."

Boston heads to the city of brotherly love to take on the Philadelphia 76ers ( 25-43) in a Sunday afternoon matinée. Tip-off from the Wells Fargo Center is at 1 PM

Celtics still remain two-games behind the first place Cleveland Cavaliers and a game in a half ahead of the third place Washington Wizards, as both teams won on Friday night. Boston is now 2-4 without Isaiah Thomas in the lineup this season.