Al Horford on rest and scheduling: 'The NBA will have to look into something' 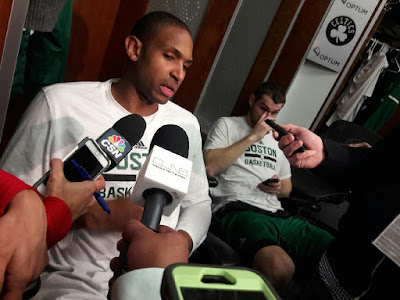 Celtics big man Al Horford weighed in on the debate regarding NBA teams resting their best players in preparation for next month's postseason.

After a national televised game between the Cavaliers and the Clippers in which Cleveland elected to rest all three of their All-Star players, NBA commissioner Adam Silver issued a statement to team owners this week threatening to hand down "significant penalties" if teams continue to sit its marquee guys.

Silver is calling for teams to provide "notice to the league office, their opponent, and the media immediately upon a determination that a player will not participate in a game due to rest." He also went on to say that he think it's inexcusable for owners to not be involved in these type of decisions.

Celtics veteran Al Horford, who has played in a handful of postseason games throughout his nine seasons with the Hawks, believes there has to be a compromise between the NBA and its players. He pointed to the demanding regular season schedule as the biggest reason why teams choose to rest their guys weeks before the start of the playoffs.


"The schedule's intense," Horford said. "The schedule's intense. It's always been like that but I just think that it's just about finding ways of making the schedule more friendly, especially to a lot of these teams that have to travel all over the place and get on these crazy road trips and things like that. That's something they're going to have to figure out."


"It's difficult," Stevens said. "You just have to manage those (tough stretches) as well as you can. If some team chooses to rest their players, I understand it has to be a discussion, but I understand why they do it."

Stevens specifically pointed out the tough stretches throughout this year's Celtics schedule -- December's six games in nine days, two West Coast trips, etc. -- while also explaining the biggest reason he hasn't chosen to rest his guys is due to the fact his team has plenty of rest due to injuries. And Stevens also understands the league's desire to see its teams at full strength.


"I understand the discussion and certainly we're all sensitive to the fact that somebody is going to watch a game in TD Garden for the first time tonight," Stevens said before Wednesday's game against the Pacers. "That's why I don't know if this is fortunate or unfortunate (injuries), probably more unfortunate because you never want to have injuries, but we had a lot of injuries so we got rest because we had to get rest.

"I do think in the last week of the season it is a little bit different. But I also understand as each team goes about it to try and best set themselves up for the postseason, the idea and opportunities is to get rest. I'm hopeful, like everybody else, that the extra week  in the season can appropriately handle some of those things but there are some really tough stretches in this and it is difficult. You just have to try to manage those as well as you can."

Horford also added that he thinks this summer is the best time for both sides to reach an agreement in regards to the schedule and that something has to change in preparation for next season.


"I just think there's a lot of moving parts going on," Horford explained. "The commissioner has a responsibility for the league and coaches are trying to look out for their players and things like that and the commissioner I feel like he is too but I think this summer the NBA will have to look into something to make sure that everybody's happy, that we come to a happy-medium and I think all of that will have to take part in the scheduling."