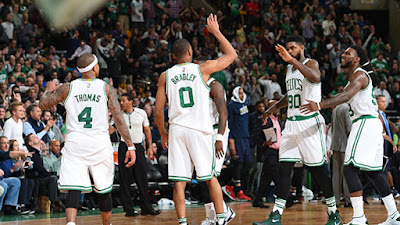 For the third straight season, the Boston Celtics are heading back to the postseason. The C's officially clinched a playoff berth on Tuesday night, despite it being an off day, with the help of the Chicago Bulls and Detroit Pistons, who each lost their games respectfully. Both teams are fighting for the eighth and final playoff spot in the East with less than a month left in the regular season.

The Celtics, who are coming off a huge win over the Wizards on Monday, have made it to the postseason in three of the last four years under Brad Stevens and nine of the last 10 campaigns overall.

Boston has a firm lead for the Atlantic Division crown and remains with the second best record in the Eastern Conferance at 45-26, two games behind the first place Cleveland Cavaliers and 2.5 games ahead of Washington.

Though the Celtics fans will be enjoying playoff basketball once again next month, their favorite green team will also have a shot at landing the number one pick in this year's NBA Draft come June, thanks to the Brooklyn Nets, who have been at the bottom of the league all season.

The C's look to create some more separation as they continue their home stand on Wednesday night when they take on the Indiana Pacers.