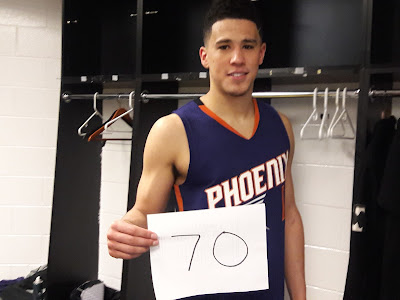 Not even 70 points from Suns guard Devin Booker could bring his team close to grabbing a lead -- Phoenix never had a chance at winning the game -- but the incredible individual performance by Phoenix's young star is one the Celtics franchise has never seen before.

From tip-off until the final buzzer, the Celtics dominated the lowly Suns while giving little to no hope of closing their deficit and turned in what should have been their most lopsided victory of the season.

Boston still managed to hold onto a double-digit win -- 130-120 -- and improved to 47-26 on the season, still one game behind the Cavaliers for first place in the conference but Boston's poor defense at the end of the fourth quarter propelled Booker to reach historic heights.

Booker's career-high 70 points marks the highest scoring performance in Suns franchise history and is the most any player has ever scored against the Celtics.

However, poor defense down the stretch led the Celtics to commit sill fouls as each player took turns in trying to slow down Booker but instead were biting on his up-fakes and sending him to the free-throw line. One play that stood out happened when the Celtics led by 13 points (128-125) with 42 seconds left. Isaiah Thomas jumped all over Booker when he fell for yet another pump fake and sent him to the line so that he could inch closer to 70.

Although  Booker was phenomenal, hitting 21-of-40 from the floor, 24-of-26 from the chairty stripe, he couldn't have reached this milestone without help from the Celtics. He topped off the C's with 28 fourth-quarter points, 18 in the final four minutes, including 8-of-9 from the free-throw line.

Alex Len and Leandro Barbosa each chipped in 11 points for Phoenix. They were the only other Suns players to score in double figures.

Celtics coach Brad Stevens expressed his frustration after the game.


"Obviously he got it going," Stevens said. "And he's a really good player. And I thought that no matter who we tried on him, he was in one of those zones in a rhythm. He was in that rhythm early in the game, and we didn't do a very good job of breaking that rhythm."

Through three quarters, the Celtics maintained their 23-point lead and nearly surrendered their double-digit lead in the fourth quarter when Phoenix pulled to within 11. However, the Celtics went on a 5-0 run to extend their lead to 16 with 8:29 left before Booker undoubtedly made the game interesting but never close.

The Suns entered Friday's game losers of eight of their last nine games and are now on a seven-game losing streak. The Celtics will continue their six-game home stand on Sunday when they host the Heat at TD Garden.

The Celtics' second unit combined for 51 points and were the biggest reason the C's led by 26 at one point. Booker's historic night is the most anyone has every scored in Boston but luckily the Celtics built a big enough lead to sustain one of the greatest scoring performance in NBA history. Avery Bradley was not in the lineup Friday due to a stomach bug, he remained at a hospital overnight to rest and receive fluids, while he should be available to play on Sunday.