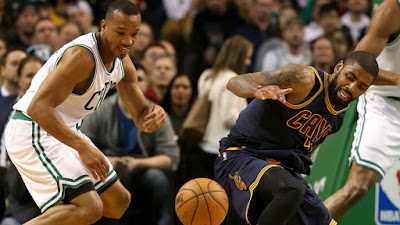 Early Wednesday afternoon, Brad Stevens issued a plan of attack and that evening his team executed it and turned it into one of their most impressive wins of the season.

Wednesday night’s 103-99 win over the Cavaliers was a testament to how tough the Celtics can be in the fourth quarter.

Even with their best scorer not hitting shots (1-of-4), the Celtics rallied behind defensive stops by Marcus Smart and Avery Bradley instead of relying on Isaiah Thomas to keep them in the game.

Facing a two-point deficit, Smart drew back-to-back offensive fouls against the Cavaliers before Jae Crowder (17 points) drained a 3-pointer under two minutes to go. Then, it was Bradley’s turn as he rattled Kyrie Irving (28 points) and drained a 3-pointer on the other end to keep his team ahead.

Out of a Cavaliers timeout, Cleveland set up sharp shooter Kyle Korver for an open 3-pointer before Thomas drained his only field goal of the fourth quarter. Irving responded with a reverse layup to tie the game (99-99) before Thomas drew a shooting foul and drained a pair of free-throws to put the C’s ahead, 101-99.

LeBron James (28 points, 13 rebounds, 10 assists) passed up an opportunity to tie the game by passing the ball to Deron Williams, who missed the potential game-winning 3-pointer.

Stevens talked about the conversation he had with his team before facing the Cavaliers and what he told his team after the win.


“I think the biggest thing: I went into the game thinking, and told our guys this afternoon, and just told them now, I wasn’t as concerned about the result,” Stevens said. “I just wanted to play with a real purpose possession to possession and maximize as many of those as possible. Let the chips fall where they may. We did a better job with that tonight than we have in a lot of games this year, which is required when you play a team of this caliber. And hopefully we can keep doing that when we go on the road.”

The Celtics held their own against the champs, surviving a third quarter scoring outburst by Irving — who scored all but five of the Cavaliers’ points in the frame — and only suffered a 3-point deficit in the fourth. Irving scored 15 of his 28 points in the third quarter but when he committed his fourth personal foul with 2:54 left, the Celtics capitalized as the two top teams in the Eastern Conference dueled until the finish.

With the game tied at 76, Thomas checked in at the 10:02 mark of the fourth quarter but was held scoreless from the field throughout the final frame before ultimately hitting a go-ahead 3-pointer with 49.4 seconds left.


“The best part of it was, we came in, we got together this afternoon, quickly talked about a plan of attack on both ends, and executed it,” Stevens said. “And after a day off, after a back-to-back, so I think that that’s a really good sign because we played with a real purpose. And I think that you have to play with a real purpose as you get further along. And the haphazard possessions that we had the other night, we had very, very few of those tonight. And I think that that was a huge difference for us.”

The return of Bradley also makes life harder for Celtics' opponents as Stevens couldn't have picked a better moment to reinsert his starting two-guard, just in time to make a great defensive stop against Kyrie Irving on potential game-tying shot attempt with 13 seconds left to play


“We missed his presence, just his abilities on the defensive end to change the game,” said Al Horford, who finished one point shy of a triple double (nine points, 10 rebounds, 10 assists). “You see how he took the challenge on Kyrie there, and just his ability to hit shots at any given time.”

The Celtics will look to take advantage of their momentum when they start a five-game road trip on Friday against the Los Angeles Lakers.