Isaiah Thomas says the Suns gave him a 'Christmas gift' 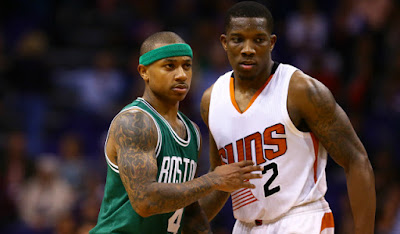 It's been over two years since the Phoenix Suns traded Isaiah Thomas to the Boston Celtics and it's been a blessing and a curse for both teams.

While Celtics fans have enjoyed the making of a superstar in Thomas, Suns fan have only the draft lottery to look forward to for the last few years.

At 20-45 the Suns, who take on the Celtics Sunday at the Talking Stick Resort Arena, are on a two-game winning streak, beating the Charlotte Hornets and Oklahoma City Thunder, despite being the third worst team in the NBA.


“They’re talented,” said Isaiah Thomas. “I played with [Eric Bledsoe]. He’s one of the best guards in the NBA, [Devin] Booker’s an up-and-coming talent. He’s going to be really good. He can shoot the ball. They’ve got players that play hard. They’ve got a good coach. We’ve got to try to just slow them down, because we know they like to get out in transition.” [Boston Herald]

When the Celtics traveled to Sacramento a month ago, Thomas was asked how he felt about the Kings giving up him and eventually making his way to the valley of the sun.

The Suns would acquired Thomas in a sign and trade after posting a career best of 20.3 points per-game at the time as a sixth-man, only for Phoenix to send their point guard packing six months later.


“Yeah, I don’t think about that anymore," Thomas said after practice on Saturday. "I was only here for a couple of months, so I thank them for trading me. I thank them with all my heart." [Boston Herald]

Thomas would further elaborate on his feelings towards the Suns franchise, the first to give him his first long-term contract


“It’s like they gave me a Christmas gift," said Thomas. "They sent me away. So I thank them. But I don’t use it as motivation. I wasn’t really here long enough to be able to, I guess, use that as motivation. I treat it like another game.” [Boston Herald]

According to the two-time All-Star, it's been a whirlwind of emotions playing in Boston the last two and a half seasons. A feeling that those who have worn the Celtics green in the past can only describe.

Now an MVP candidate and the league's second leading scorer, Thomas has enjoyed quite a season so far that at times he didn't think it was possible to accomplish all he has up to this point in his career.


“Nobody believed it, except probably my friends and my family,” he said. “Nobody believed anything that I’ve always said until I showed them. And I’ve been given the opportunity here in Boston to showcase what I can do, and I’m taking full advantage of it." [Boston Herald]


“I think he just is a guy that constantly strives to improve,” said Stevens. “I think that he wants to be better. He takes every slight as a chip on his shoulder, but he also takes every success as a hunger to do more.

“I think the other thing here is, with the guys around him, he has been exactly what we’ve needed, and I think those guys around him fit his style well — a bunch of skilled players. We needed a guy that could get in the paint and create for others, and it’s been a good fit both ways.” [Boston Herald]