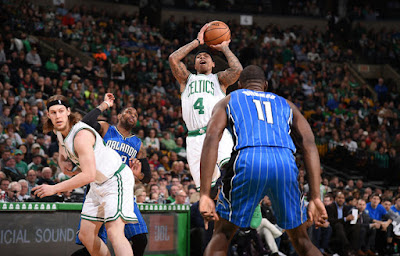 On a night where Orlando shot better from 3-point land and out-rebounded the Celtics at the TD Garden, it was Amir Johnson who came up big in the final seconds to help fend off the visiting team in a 117-116 win over the Magic on Friday night.

It was Johnson (5 points, 5 rebounds, 3 assists and 2 blocks) who contested Elfrid Payton (12 points, 15 assists) possible game-winning layup on a switch after big man Nikola Vucevic set a screen behind Marcus Smart (7 points, 6 assists) and he didn't let up as the Magic point guard drove to the basket.

With 13.7 seconds left, Orlando opted not to call timeout and they ran the final play of the night


"We all knew that was going to be the plan," Magic coach Frank Vogel said. "I love that we attacked in a scramble situation like that and got to the rim."

Isaiah Thomas led all scorers with 35 points, 7 assists, while Jae Crowder added 18 points and 5 rebounds for the Celtics. Jaylen Brown added 12 points in another start for Avery Bradley (illness) and Al Horford also chipped in 12 points to go along with 9 rebounds and 6 assists.

Aaron Gordon led the Magic with 32 points, 16 rebounds and 2 blocks. Evan Fournier added 20 points, 2 steals and Terrance Ross chipped in 17 points on 4-of-9 from behind the arc. Jodie Meeks scored 13 points off the bench for Orlando, who are now 27-49 on the season.

Boston trailed by 13 with 1:50 to play in the first half, before they made a little run and cut it 64-57 at intermission. Orlando kept their foot on the gas in the third quarter as they maintained a double-digit lead into the final frame.


"Any way we can get a win is what we're looking forward to," Isaiah Thomas said. "They're a different team. ... They've been playing a lot better since the All-Star break."

Thomas led the charge and Al Horford's free throw with 1:22 left in the game put the Celtics up for good. The Magic would go on to miss their last three field-goal attempts down the stretch, including a potential game winning layup.

Boston is now 49-27 on the season and still maintain the half-game lead over the Cleveland Cavaliers for the best record in the East with six left to play. The Celtics will travel to New York to take on the Knicks on Sunday afternoon.

Avery Bradley was out due to a stomach bug once again, Stevens commented on the status of his shooting guard--"He's not in the hospital, but he's not doing so hot," he said. It's unknown if he will travel with the team to New York this weekend.