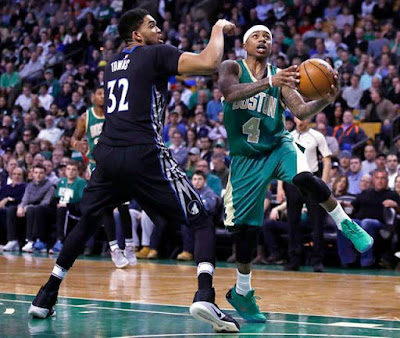 Isaiah Thomas will miss this weekend's two-game road trip to Brooklyn and Philadelphia. The Celtics announced on Thursday that the All-Star suffered a right knee bone bruise, and will not travel with the team when they face the Nets Friday and the Sixers on Sunday.

Thomas, who finished with 27 points while playing 32 minutes in the C's win over the Timberwolves on Wednesday night, did not indicate he had sustained an injury during the game at the TD Garden.

Ironically, he did point out how he'd like to have his team's starting five stay healthy and play more than 334 minutes and 28 games while they make a push towards the playoffs.


"We haven't been together that much," Thomas said. "We go together four, five games and somebody will get hurt or go down, and then we'll go another four or five games together. So I'm glad we could get a good stretch of games together. Hopefully everyone will stay healthy and we can finish the season off right."

The Celtics are 21-7 this season when the opening night starters play together, among the NBA's best despite this latest hiccup.

Apparently, Thomas hurt his knee in the third quarter when he crashed and hit the floor against Minnesota, but it did not swell up until the next morning.

Brad Stevens has elected Marcus Smart to start in Thomas' place this weekend as Boston is only two games behind the first place Cleveland Cavaliers and a game and a half ahead of Washington, who the Celtics will face Monday on the second night of a back-to-back.

Hopefully the C's, who are 1-3 when Thomas is not in the lineup, can take care of business against two of the worst teams in the East over the next three days, before their point guard most likely makes his return in an important matchup against the Wizards at home.